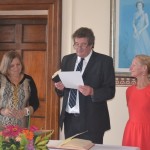 On Friday 18 March 2016, Head of the Governor’s Office, Sean Burns, took the Prescribed Oaths as Acting Governor in the presence of the Sheriff, Mrs Ethel Yon OBE, and other witnesses, in the Governor’s Office at the Castle (photo attached).  Mr Burns’ appointment was immediately effective on Friday.

HE Governor Capes departed the Island on Friday 18 March 2016 for France and Corsica on official business.  He will return to the UK during April at the end of his term in office.