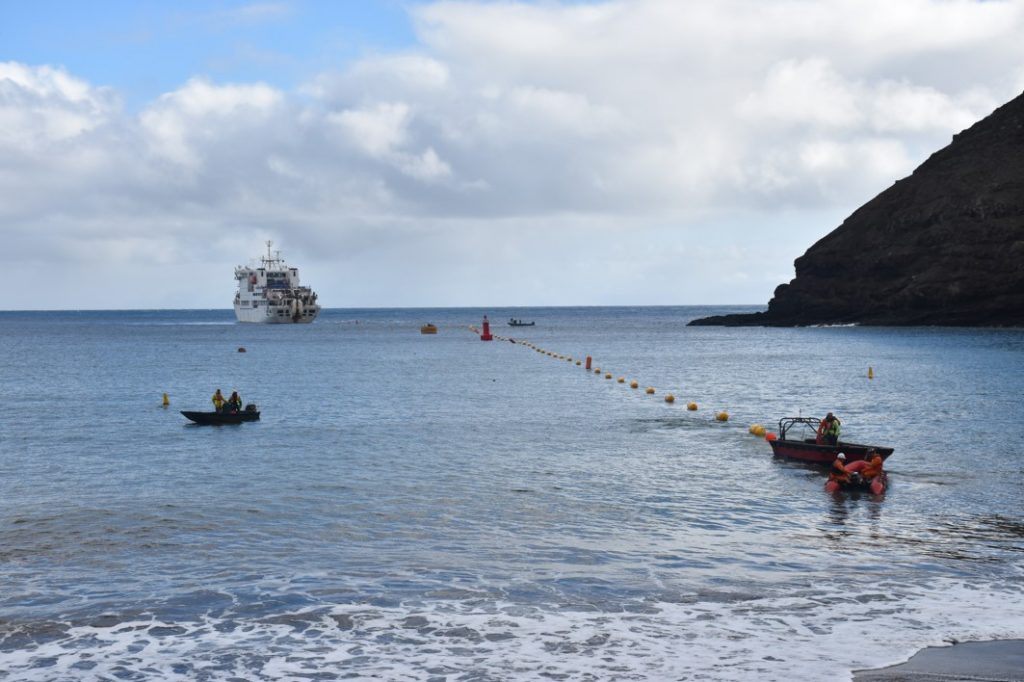 Sunday, 29 August 2021, was a ground-breaking day in St Helena’s digital history as the Island’s branch of the Equiano Subsea Cable was landed here at Ruperts Beach. This was the first shore landing of the cable in the entire Equiano Cable Project, having up until Sunday only been placed at sea.

“This is a momentous occasion for St Helena, bringing us one step closer to providing faster internet connectivity to residents and driving the Island forward in the digital age.

This landing means we physically take ownership of our own branch which is 1,154 km long. The Teliri is now sailing towards the West Coast of Africa pulling the Fibre Optic Cable behind her to attach to the main trunk of the Equiano system, connecting Europe and South Africa.”

“St Helena Government once again acknowledges the €21.5 million allocated by the EU under the EDF’11 programme to the territory, of which St Helena received around €17 million to support the delivery of the SHG Digital Strategy and to achieve the goals of the 10 Year Plan.

All those who have been involved in this project so far should be congratulated. Whilst there is still much to do, we continue to prepare for digital transformation. We look forward to businesses and consumers having access to faster, reliable and affordable connectivity, one of the key building blocks to ensuring sustainable economic growth.”

Leading up to Sunday’s landing, preparation and excavation works were undertaken at Ruperts Beach including the necessary marine works where divers placed on the seabed the piping in which the cable is now enclosed. On Sunday, the cable was dropped over the side of the ship, placed in these pipes and laid and secured in a predefined path on the Ruperts seabed. The end of the cable was installed at the Modular Cable Landing Station in Ruperts, where it will link into the Island’s digital infrastructure.

SHG’s Head of Technical Services, Chris Peters, responsible for the civil and infrastructure works that allowed the cable to be landed at St Helena, added:

“We have been involved in the Project for a couple of years now and with local teams and contractors we managed to deliver a solution in readiness for the cable landing.

“This is a great outcome, not only for what we have achieved, but for St Helena as a whole.  It is exciting to think where St Helena can go from here.”

The latest indicative timetable for the provisional acceptance of the Equiano Cable Project suggests the cable in its entirety will be ready for service around the second half of 2022.

Next steps in the Project include the testing of the associated Power Feed Equipment and the installation of the Submarine Line Terminal Equipment, which will allow for the front haul link to be interconnected to the respective Internet Service Provider’s backhaul infrastructure.