St Helena has some spectacular marine life including the majestic whale sharks, or bone sharks as they are commonly known here. Seeing and swimming with these creatures during their seasonal visits to the Island is an opportunity not to be missed… and guess what, they’re back in our waters now.

Whale sharks are the largest fish in the world, growing to over 18 metres and 20 tonnes. St Helena is visited by both male and female adult whale sharks in reliable numbers, which is unusual when compared with other places. 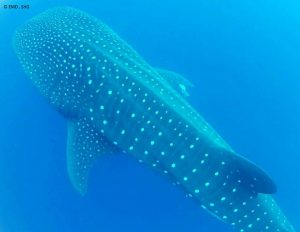 Whale sharks frequent St Helena’s waters annually, usually from November and generally disappear April/June peaking in Jan/Feb. It is thought that St Helena may be important for the reproductive cycle of these creatures and a number of the females seen during a large gathering appeared to be pregnant.

There are various whale shark tours offered on St Helena. Don’t miss out on the chance to see and even swim with these beautiful creatures, but remember the following guidelines for interacting with them:

If you follow these guidelines, whale sharks are undeterred by swimmers although they will sometimes be interested by the bubbles created by finning.

The Island is a safe haven for whale sharks (and many other mega fauna species) and St Helena continues to take a precautionary approach when interacting with them to ensure the environment in which interaction is undertaken is as natural as possible.

St Helena offers one of the best experiences in the world for snorkelling with this species and swimming and snorkelling is a better way of interacting with whale sharks here as they normally swim near the surface. This also gives whale sharks an opportunity to avoid being close to people if they so choose by simply diving below them.

The rules around interacting with whale sharks in and around St Helena have been informed by best practices elsewhere in the world and are supported by logic about guest experience and animal welfare. Please help us continue to provide a safe haven for whale sharks for generations to come.

Further information on whale sharks can be found here: https://www.sainthelena.gov.sh/wp-content/uploads/2018/07/Whale-shark-leaflet.pdf