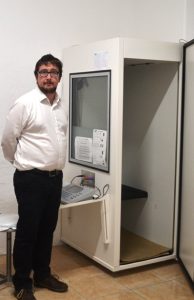 First time visiting Audiologist, Sean McCann (photo attached), has been on Island for the last four weeks providing an Audiology service to the people of St Helena.

As an Audiologist, Sean diagnoses and treats people with hearing, balance and tinnitus problems – this can be either through self-referrals or referrals from GPs or Doctors.

“There are a variety of ear complaints, so what I’ve been doing is testing people’s hearing, and for those that are suitable I have been able to fit them with some prescribed hearing aids from the UK National Health Service (NHS).

“There have been some patients here who do require referral onwards to see an Ear, Nose & Throat (ENT) Doctor, but principally my main job has been looking for problems with hearing loss and habilitating it with hearing aids.”

One of Sean’s main concerns found while on St Helena is people using cotton buds in their ears.

“We strongly recommend not to use cotton buds in your ears for two main reasons – you run the risk of injury by perforating your eardrum and, instead of removing the wax, people are pushing it deeper and compacting it together and making it really hard to remove. Wax should migrate naturally outwards on its own. Just use a damp cloth on the outside of your ears but never put anything into your ears.”

During his time on the Island, Sean has seen over 100 patients and fitted around 75 hearing aids. He has also been working closely with various nurses to provide them with training in conducting basic hearing tests and hearing aid maintenance.

“I think the population of St Helena is aging and as you get older you lose your hearing –  it’s very common and the only thing that will enable you to regain some of your hearing is hearing aids.

“The main hearing problems that people have on St Helena are the same as anywhere else in the world, but testing hearing and early treatment of these problems can be a great help.”

Sean departs the Island tomorrow, Saturday 27 August 2016, but it is hoped that an Audiologist will become a frequent visitor to St Helena.