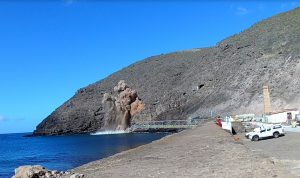 A small blasting operation to dislodge a dangerous rock outcrop was successfully carried out on the eastern side of Rupert’s Beach – near Bloody Bridge – on Thursday 24 November 2016 at 4pm. Approximately 100 tonnes of rock was removed from the cliff face (see photos attached).

“The operation took two weeks to plan and, although a success, was not an easy task. The Rock Guard team – Darin Francis, Delroy Leo, Deon Caesar, Matthew Williams, Tyler Leo, and Blast Manager Alan Hudson – did a great job on the day and leading up to it.

“As the nearest road to the blast site is at Rupert’s Beach, all the equipment needed for the operation was carried out on foot. This in itself highlights what a great job our Rock Guards do.

“There was good multi-agency working on this operation which included Police, Fire and Sea Rescue Services, Emergency Planning Department and ENRD’s Civil Engineer.” 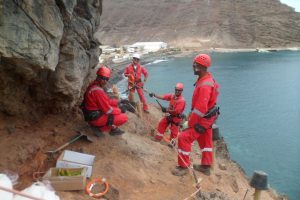 The decision to remove this rock outcrop was made following regular inspections on the cliff face in the Rupert’s Beach area.  After a risk assessment, it was agreed to remove the rock by way of blasting.

“I would like to extend thanks to all residents and workers in Rupert’s who evacuated the area on time, and to Father Dale who allowed the use of St Michael’s Church as a rest area for the duration of the operation.”