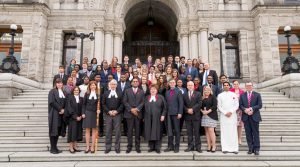 During the Youth Parliament, April and Alexia met with many Commonwealth representatives and officials, including the Speaker of the House for the Legislative Chamber. They also had the opportunity to improve their understanding of parliament and how parliament operates – this included participating in, and observing, how a Bill becomes a Law – together with observing how debates are carried out in parliament. This helped April and Alexia to gain an understanding of the importance of these debates in parliamentary procedures. 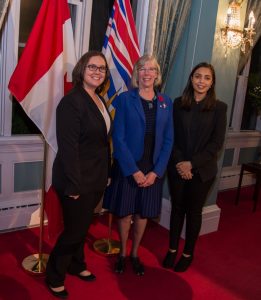 as certainly an eye-opening and educational one. We both had very little knowledge about how parliament operates and we will admit that this was a bit daunting. However, we did our best to prepare ourselves to ensure that we were ready for the days ahead.

“For anyone interested in pursuing an opportunity such as this, we would strongly recommend that you do your research beforehand and ensure that you have a clear understanding of what is expected of you at this event. This will enable you to contribute fully to all discussions and debates.

“Our knowledge and understanding of parliamentary procedures has greatly improved since attending this event.”

To celebrate their last night in Victoria, all Youth Parliamentarians, officials and organisers of the event were invited to attend a closing dinner, hosted by the Honourable Judith Guichon, Lieutenant Governor of British Columbia, at her official residence. All invited were able to meet with the Governor directly.

Thanks are extended to the Commonwealth Parliamentary Association Secretariat for funding St Helena’s representation at the Youth Parliament.