The White Ribbon Campaign was launched on Friday 25 November 2016, by the St Helena Safeguarding Directorate. The campaign will run until Friday, 2 December 2016.

The United Nations (UN) officially recognises White Ribbon Day on 25 November as the International Day for the Elimination of Violence Against Women. The White Ribbon is a symbol of hope for a world where women, men, girls and boys can live free from the fear of violence. Wearing the ribbon is about challenging the acceptability of violence against adults as well as children.

The catchphrase for the campaign on St Helena is, ‘Together We Can End Domestic Violence’. As part of this campaign, all four schools showed their support by wearing white and assembling into the ‘White Ribbon’ symbol. 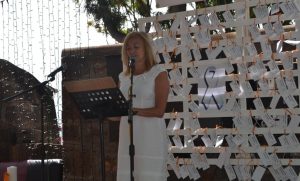 “Today around the world, people join us in setting aside this day to speak up against domestic violence. Here on St Helena for the past week, including today, and for the days to follow, we are committing to break the silence about violence by honouring our intentions to not condone, commit, or be silent about violence in our society, homes, work places, and schools.”

During the ceremony, Detective Sergeant, Louise Scott, read out a letter from a survivor of an abusive relationship – here on St Helena. Three candles were lit in memory of victims of abuse, by Governor Lisa Phillips, Adele McMahon and Nicholas Stevens, and Sophie and Laura O’Keeffe followed with a beautiful song. 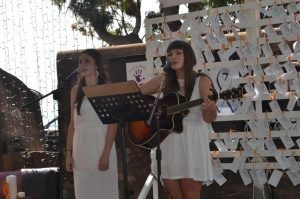 “It might not be easy to identify domestic violence at first. While some relationships are clearly abusive from the outset, we know that abuse often starts subtly and gets worse over time. Women’s confidence hit rock bottom and somehow it seems easier to accept the violence and abuse than do anything about it.

“The opening of Brick House earlier this year marks the beginning of the end of the cycle of violence and abuse for those women on St Helena who have been too worried or too afraid to do anything about the violence they experience. The message to them is that the only way to break the cycle of domestic violence is to take action – and the sooner the better. Start by telling someone about the abuse, whether it’s a friend, a neighbor, your doctor, or other close contact. At first, you might find it hard to talk about the abuse, but you’ll also likely feel relief and it will be a first step to getting much-needed support. 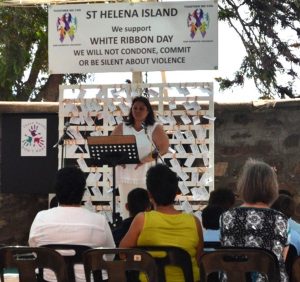 “My message to women on St Helena is ‘Take back the power and you will feel more powerful’.”

Governor Lisa Phillips then carried out a symbolic tying of the White Ribbon.

Acting Director of Safeguarding, Paul McGinnety, thanked everyone for attending the event. Special thanks were extended to HE Governor Lisa Phillips, Louise Scott, Victoria Kellet, the SHG Press Office, local media, the United Nations for funding the Safe Haven, and Johnny Dillon for helping with the venue.

Exceptional thanks went to Nicolene Adams, for setting up and implementing the systems that enabled support to be offered to survivors both in the Safe Haven and in the community, and for the coordination of the White Ribbon event, especially for the manner in which agencies worked together.