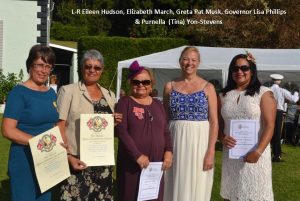 A Garden Party to mark the 90th birthday of Her Majesty Queen Elizabeth II was held at Plantation House on Saturday 11 June 2016.

In addition to recognising the commitment and service of Her Majesty the Queen, Governor Lisa Phillips also acknowledged individuals on the Island for their dedication and service to St Helena.The Governor thanked all for attending and presented members of the community with well-deserved certificates for their tremendous efforts.

“Today, on the 90th birthday of Her Majesty the Queen, I have been asked to consider what St Helena will be like in 90 years’ time. This is not an easy task and I’m not sure if I will even be alive by then.

“On this special occasion, it is best to be optimistic, so with this in mind I have decided to talk about positive changes which, I as a young person, hope will happen to our Island within the next 90 years.

“I’d like to see more young people not just gaining qualifications and having the opportunity to develop skills, but also taking the opportunities available to become leaders in the Island’s community. I would like for more St Helenians to take leading positions and jobs within our community, and participate increasingly in the running of our Island.

“I would like to say Happy Birthday to Her Majesty and wish us all a great and prosperous future.”