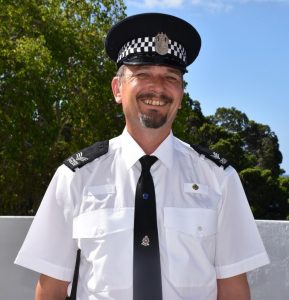 Craig Ogborne (pictured), has recently joined the St Helena Police Service as a Police Training & Development Sergeant, having arrived on the Island on Tuesday 22 November 2016. He will initially be on-Island for 12 months.

Craig’s role will be to develop Island police officers and others within the police service, to improve their working knowledge of the law and of procedures, and to raise standards of professionalism. He will also conduct police patrols and contribute to neighbourhood policing.

“Coming to St Helena is a great opportunity to learn about policing in a different community, as well as the chance to share my skills and knowledge with local officers and staff.”

“Sergeant Ogborne brings a wealth of experience in training and policing generally and his appointment will play a key role in developing the talented local officers that I have in my team.”

Craig has been a police officer in the UK for 28 years and has been involved in a range of policing activities. Most of his work has been carried out in Bristol, as a Neighbourhood Officer, and later as a Sergeant – responsible for crime prevention, neighbourhood policing and training.