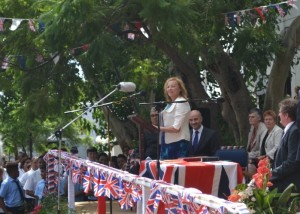 Ms Phillips is the 68th Governor of St Helena and her Dependencies and the first ever female to take on the role. She was sworn in this afternoon, just after 2pm, Monday 25 April 2016 (see photos attached).

The familiar music of the Scout’s Band signaled the opening of the Inauguration Ceremony, which was also marked by the traditional parade of the St Helena Police, Sea Rescue Service, Fire Service, Guides, Brownies and Rainbows, Scouts and Beavers and the Seventh Day Adventist Pathfinders. The Salvation Army Band and members, the Get-togethers Orchestra, Customs Officers, Nurses and a group of schoolchildren were also present.

At 2pm the Governor Designate arrived at the Grand Parade, accompanied by the Aide de Camp, Debbie Stroud, who escorted her to the stage in front of the Supreme Court Terrace, where she was received by Chief Secretary Roy Burke.

The Chief Secretary read the Royal Commission appointing Lisa Phillips as Governor of St Helena, Ascension Island and Tristan da Cunha. This was followed by the Administering of Oaths by St Helena’s Sheriff, Ethel Yon OBE, who also read the Address of Welcome.

In her reply to the Sheriff and her address to the public, Governor Phillips remarked:

“Since I found out I was coming here, anyone I met told me there are three things they knew about St Helena.  First, your famous previous resident, Napoleon, Second, your famous current resident, Jonathan. And third the new Airport.  In a way, they are perhaps indicative of the past present and future of the Island.  I am tremendously excited about the Airport. Having spent more years than I care to mention in DFID I am acutely aware of the history of the Airport from the inside, with all its twists and turns.  Never did I imagine I would be the first Governor to fly in and out of the Island.  I am proud to have that privilege in store for me….and talking of firsts I am also very proud to be your first female Governor.”

Following Her Excellency’s remarks, an address was made by Mr Alex Cameron, Head of the Southern Oceans Department, in FCO’s Overseas Territories Directorate. Mr Cameron expressed his thanks for such a warm welcome to St Helena for the new Governor and wished her well in her new role.

A full copy of the Governor’s and Mr Cameron’s speeches are attached to this release.

Her Excellency then inspected the Parade with the Parade Commander Trevor Botting, followed by a Prayer and Blessing from the Vicar General, the Venerable Archdeacon Dale Bowers – and a March-Past by the Uniformed Contingents.

Her Excellency then proceeded to the Governor’s Office where she was able to greet members of the public, Councillors, dignitaries and officials.

Four photos are attached to this release.