HISTORIC VISIT OF RMS TO LONDON 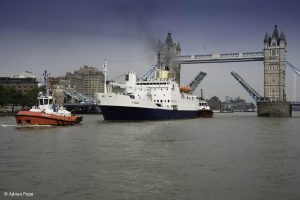 The RMS St Helena is pictured yesterday afternoon (7 June 2016) in the attached, west of Tower Bridge on the River Thames, prior to tying up alongside HMS Belfast.

The RMS arrived at Tilbury Docks in the UK on Sunday 5 June 2016, with 123 passengers on board. She will depart the Pool of London at approximately 17.30hrs on Friday 10 June and return to the London Cruise Terminal at Tilbury.  Here some 600 members of the public will visit for a pre-booked tour of the ship on Saturday 11 June.

After loading cargo and passengers, the RMS will depart from Tilbury at 16.00hrs on Tuesday 14 June, en route to Tenerife, Ascension and St Helena.