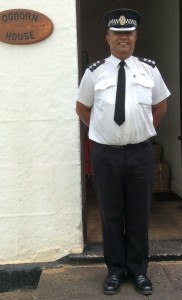 The Police Directorate this week said thank-you and goodbye to Chief Inspector Merlin George (pictured), who retired from the Police Service yesterday, Monday 29 February 2016, after serving for over twenty-eight years.

“Merlin George has serviced the communities of Ascension Island and St Helena with great distinction, being professional, respectful and compassionate. I am personally grateful for the support he has given me during my time on St Helena and wish Merlin and his family a very happy and well-earned retirement.”

Chief Inspector George joined the Police Service in 1984 and has served on both Ascension Island and St Helena. During his career he has worked in investigations and uniform operations and completed the challenging 14-week Police Officer Initial Training course in the UK.

His dedicated service to the community has been recognised by the awarding of a Long Service Medal, Good Conduct Medal, Queens Golden and Silver Jubilee Medals and a Commendation from The Chief Justice for his courage shown during a firearms incident.