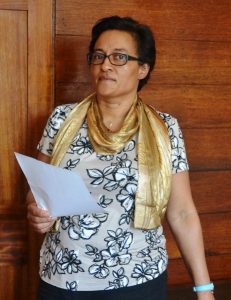 The Elections Ordinance 2009 provides for Nominations to be delivered to the Returning Officer by no later than noon on the last day appointed for the Nomination of Candidates. The closing date for nominations for the 2016 Bye-election (to be held on Wednesday 7 September 2016) was today, Wednesday 24 August 2016.

Returning Officer, Gillian Francis, this afternoon announced the names of three Candidates who will be standing for the upcoming Bye-election and a seat on Legislative Council (photo attached).

The Candidates are as follows:

The full Declaration, including the names of Sponsors, will be Gazetted as soon as possible and hard copies will be placed at the usual outlets and published on the SHG website.

Further information about Polling Day, how and where to vote and voting by Proxy will be published as an insert in next week’s newspapers.