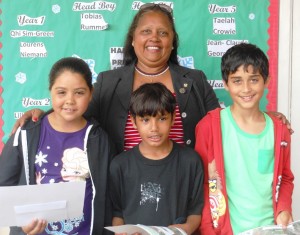 ompetition to name the Airport Access Road was held in all Island schools. Run on behalf of the Environment & Natural Resources Committee
(ENRC) the competition attracted 153 entries.

“Due to the high quality of entries received and following a site visit to the Access Road, the Committee decided that the 14km road would lend itself to several names in different sections of the road. We therefore decided on seven names – with one student winning two prizes.”

Certificates and prizes were awarded to winning students this week (photos attached). Competition winners were:

“The Committee chose the winners based on the different elements along the Airport Access Road.

“We liked African Slave Road as this shows the area where the recent excavations uncovered the slave graves. Airbay Ro 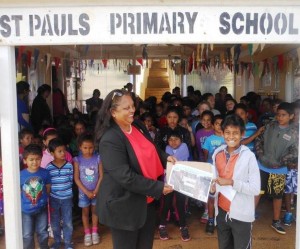 ad was felt to encompass the flow of the road from the Airport to Rupert’s Bay.

“Boer Road and Pipe Ridge Pass were section s near the old roads of those names, while Flagstaff View and Wirebird Way are sections where you have a view of Flagstaff and the Wirebird nesting area respectively.  Finally Wainwright Way was chosen to honour our own Sharon Wainwright who worked so hard to make the Airport a reality but sadly did not live to see it to fruition.”