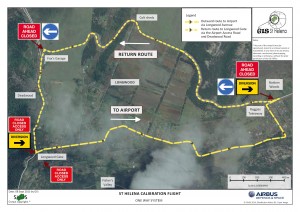 On Friday 4 September 2015 Basil Read was granted temporary use of the St Helena Airport runway by Air Support Safety International (ASSI).  This heralds an historic milestone next week when a Beechcraft King Air 200 aircraft is due to land at the Airport to carry out a series of calibration flights. This will be the first ever plane to land on St Helena.

ASSI Senior Aerodrome Inspector, Justin Rothwell, carried out an assessment of the Airport infrastructure and safety procedures.  As a result, an exemption was granted until 30 September 2015 to enable the calibration flights to go ahead.

The aircraft is due to arrive between Sunday 13 and Thursday 17 September 2015, dependent upon suitable weather and other factors. The precise date and time of arrival is therefore still to be determined, but every effort will be made to inform the public as early as possible.

The calibration tests will be undertaken by Flight Calibration Services Limited (FCSL) who will travel to St Helena on the aircraft leased from TAB in South Africa.  The aircraft will fly from Lanseria Airport in Johannesburg, to Namibia, then to Angola and on to St Helena, taking approximately four hours for the final leg of the journey to the Island.

The aircraft will likely arrive between mid-morning and early afternoon.  We expect that it will approach the northern end of the runway (i.e. from the direction of The Barn) and that it will carry out an initial low-level pass of the runway before coming in to land.

Although it is expected that the first flight to land at St Helena Airport will generate a huge amount of public interest, the public should be aware that this will not be the only chance to see this aircraft.  It will remain on the Island for around a week, undertaking several flights each day (weather permitting).

The public is advised that there is no access to the Airport Site. Instead, Basil Read, working closely with the St Helena Police Service, has identified various public vantage points where people will be able to get a good view of the aircraft. Other vantage points, such as Woody Ridge, will be available – but there will be no traffic management available at those places. The public is therefore asked to take extra care when driving to and parking at other vantage points on the Island.

The public are strongly encouraged to car share where possible, and to be mindful of their personal safety, particularly when on foot. People should drive and park sensibly and be aware of their surroundings.

Basil Read has granted permission for part of the Access Road, normally closed to the public, to be used as part of a one way system on the day to alleviate congestion. To approach the vantage points below, vehicles will be allowed through Longwood Gate and through to Bottom Woods. To return, vehicles will be directed past Reggie’s Takeaway at Bottom Woods, along the Access Road, through to Foxy’s Garage at Deadwood and then back to Longwood Gate (See attached map).

The entrance to Fisher’s Valley will be closed to all traffic other than residents.

Further updates, particularly on the timing of the first flight, will be provided in due course. Interested members of the public are asked to listen out for regular radio news updates, beginning on Sunday 13 September.

Enquiries about the practical arrangements on the day the plane arrives should be directed to the Police on tel: 22626.