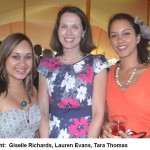 On Saturday 26 April 2014, a Garden Party was held at Plantation House to mark the birthday of Her Majesty the Queen.

The weather held out, and with good organisation of the event by Debbie Stroud many mingled and enjoyed the day which included a mixture of St Helenian society; Prince Andrew School Students, Girl Guides, Boy Scouts, private sector individuals, retired public servants, SHG Officials and Councillors attended – with many individuals having their medals on display.

HE Governor Mark Capes, called the gathering to order by blowing the ‘Bosun’s whistle’, presented to him by the Captain of the French Frigate ‘La Fayette’ on 15 April.

In addition to recognising the commitment and service of Her Majesty the Queen, the Governor also acknowledged individuals on the Island for their dedication and service to the community.  The Queen’s Certificate was awarded to Mr Lionel Lawrence, whose working career commenced in 1949 when, at the age of 15 years, he was employed as an apprentice in the Agriculture and Forestry Department.  Lionel retired in 1991 having served the Department for a total of 42 years. 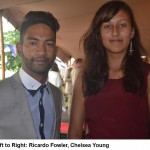 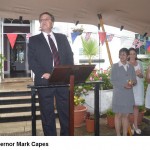 The second award for the Queen’s Certificate of Honour went to the late Mrs Shirley Anderson-Leo, who worked for 40 years as a registered general nurse and midwife.

The achievements of those returning from study were also commended.  Ricardo Fowler, April Lawrence, Nikita Crowie and Tara Thomas, who have recently returned from the United Kingdom, were all recognised for their achievements.

Also mentioned were Robyn Sim, who will shortly be leaving St Helena on a three year teacher training course at the University of Hertfordshire and Matt Joshua, who will be taking up a place on a three year Diploma in Hotel Management at the International Hotel School in Cape Town. 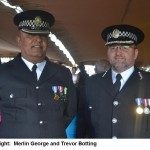 The Governor highlighted these individuals as examples of those who choose to better themselves to improve the Island’s skill base, vital for the future prosperity of St Helena.

The Governor’s speech is attached, together with four pictures.