Head Teacher Paul Starkie opened the ceremony, highlighting to students the determination needed to achieve their goals and the responsibility of becoming future leaders on the Island.  He referred to the late Mrs Shirley Anderson, who he praised as a positive role model and a person who was compassionate in caring for those in need. 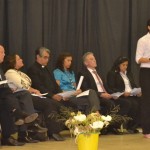 An overview of the school’s activities and events during the year was presented by Head Girl Chelsea Young, who encouraged all fellow students to strive towards their ambitions and to never give up.

The first presentation of the day went to joint winners of the House Cup – Mundens and Jenkins.  The Sports Awards then recognised students’ outstanding commitment and teamwork, and were presented to Christian George, Tanisha Benjamin, Alexia Reynolds and Kieran Bowers.  For their dedication to Performing Arts, Alex Vanguard, Shelby Bargo, Deolandre De Jager and Kayleigh Harris collected their certificates and medals. 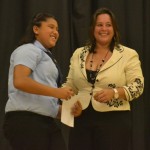 Councillor Christine Scipio-O’Dean noted the importance of the local community in supporting young people to do their best.  This was echoed with the Heart of Gold Awards, presented to John Dillon and Raymond Young for their help involving swimming sessions, lifeguard duties and in preparing Island and Commonwealth Games participants.  Their dedication towards learning support students was also commended.

The Environment and Conservation Award was presented to Jacob Bowers, the Student of the Year Awards to Chelsea Henry, Christian George, Keegan Yon and Scott George.  Citizenship and Progress Awards also recognised other students. 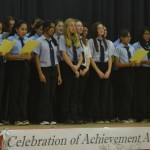 “We are very proud of our childrens’ achievements.  A big thank you to all our sponsors, and a special thank you to all students for your commitment to learning.  I also want to pay tribute to Nicky Leo and his team for crafting the awards presented today.”

Father Dale also praised teachers Jeanette Williams and Daphne Greentree on their imminent retirements, pointing out that they taught him and many other adults in the hall. 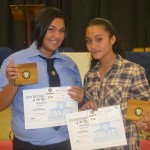 Four pictures are attached to this release.