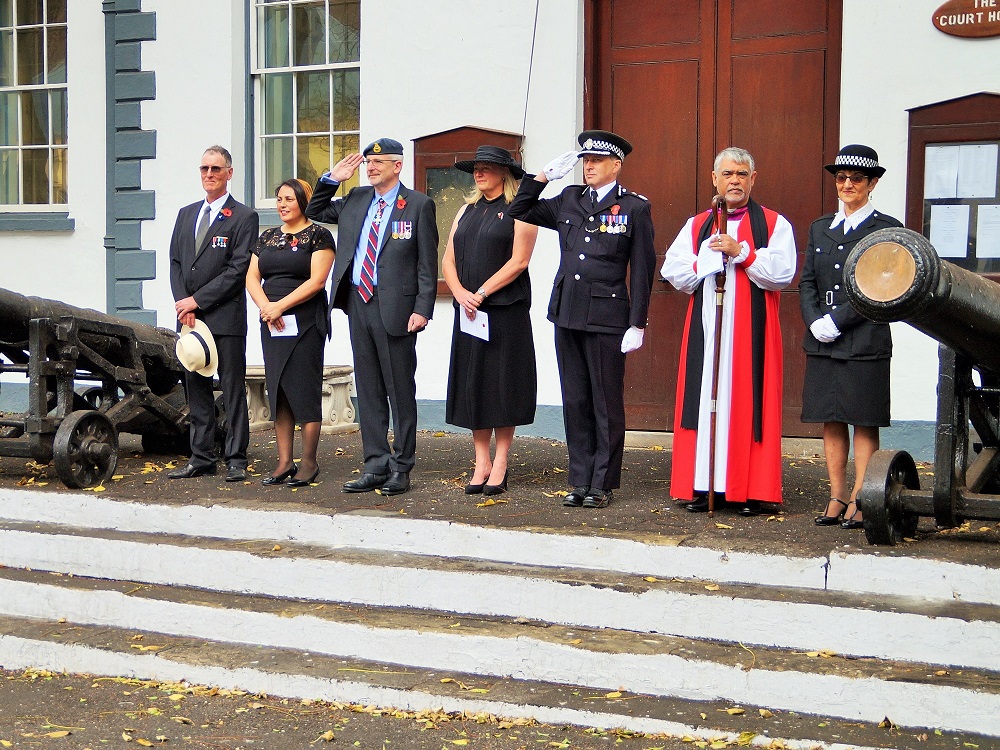 The annual Remembrance Sunday Divine Service, in honour of those who lost their lives in the violence of war, as well as those who served and survived these wars, was held at the Cenotaph in Jamestown on Sunday, 13 November 2022.

The Right Reverend Lord Bishop of St Helena, Dale Bowers welcomed those in attendance which included His Excellency the Governor and Mrs Phillips, the Honourable Speaker, Honourable Chief Minister and the Chief Secretary, Ex-Servicemen and Women, persons who served on the RMS St Helena during the 1982 Falklands War and the St Helena Veterans Association (SHVA).

Following the scripture readings the Governor and Stefan Thomas, President of the Prince Andrew School Student Council,  then gave the act of Remembrance before a two-minute silence was observed. The silence was signalled by the Last Post, played by members of the First Jamestown Scout Group.

A wreath was laid for St Helena, Ascension and Tristian Da Cunha by Governor Phillips with other wreaths being laid for the President of the French Republic, the Government of St Helena, the Royal Navy, the Army, the Royal Air Force, the Merchant Navy, the St Helena Police Force, the St Helena Fire and Sea Rescue Services and the SHVA. Members of the public and school children also laid wreaths.

A wreath was also laid by divers in the harbour, in commemoration of those who lost their lives on board the RFA Darkdale.

The national anthem was sung and the service was concluded with a blessing from Bishop Dale.

The Island’s servicemen and women then proceeded with the march-past parade outside the Court House.

Alongside the service on-Island, St Helena Government’s UK Representative, Mrs Kedell Worboys MBE, attended the UK’s Ceremony of Remembrance at the Cenotaph in London and laid a wreath on behalf of St Helena, Ascension and Tristan da Cunha.

“It was an honour to lay the wreath this year on behalf of the Governments and people of St Helena, Ascension and Tristan da Cunha. It is a fitting tribute to the islanders who has served with the Armed Forces in conflicts around the world.”