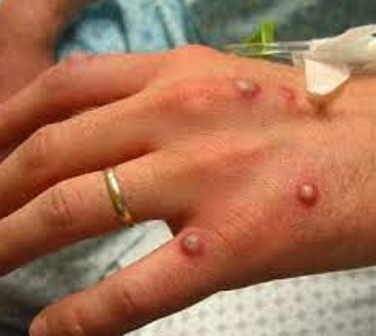 Monkeypox is an infection that is usually only seen in West and Central Africa. The virus does not have anything to do with monkeys, but is carried by rodents, especially squirrels and rats. Humans become infected by handling, eating, or being bitten by infected rodents, after which monkeypox can be passed on to other humans via close contact.

Most people with monkeypox can experience symptoms such as a fever, muscle aches, and an itchy, blistering rash. However it is not a particularly dangerous illness, and almost everyone makes a full recovery.

Since early May 2022, cases of monkeypox have been appearing in areas other than Africa, and in people who have never travelled abroad. As rodents in these countries are not known to carry monkeypox it is likely that infection is being spread from person to person. So far there have been about 1000 cases of monkeypox worldwide; with approximately 320 of these being in the UK.

Monkeypox can be passed from person to person by direct skin contact with the infected person’s blisters, touching bedding or clothing that has been in contact with blisters and more rarely from the cough of someone with the infection. Although the current worldwide outbreak of monkeypox is unusual and medical professionals still don’t fully understand why this has happened, the actual number of people affected remains very small.

The risk of an infected person bringing monkeypox to St Helena is minimal. However as a precaution the Health Directorate advises anyone arriving to the Island who may have recently developed a rash, to report this immediately to the Health Services Directorate.   It is extremely unlikely that anyone already on-Island will develop monkeypox, unless they have been in direct contact with a person with the disease. However anyone who does develop a blistering rash as that shown in the attached picture, please contact the Health Services immediately.

Note: figures used within this article were current at the time of issuing.