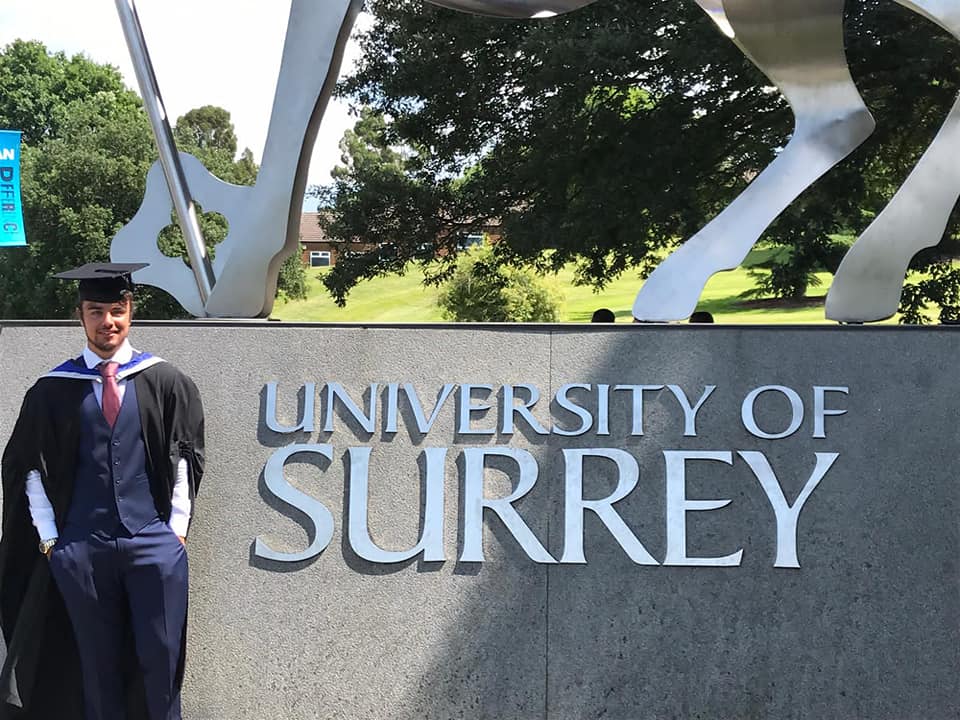 Scott George of Sea View graduated from the University of Surrey with a first-class honours degree in Aerospace Engineering on Monday, 19 July 2021, following three years of study.

“The first year of my course was a general year during which a variety of general engineering principles were taught to not just my specific course, but every mechanical engineering discipline. This year provided the foundation for the second and third years where we would specialise in our chosen field. Academic modules in the first year included Materials, Fluid Mechanics, Solid Mechanics, Thermodynamics, Mathematics and Electronics. This year also included some practical modules including an experimental module and a manufacturing module where we learnt and practiced metal processing techniques.”

During his second year of university, Scott diversified his study and undertook more aerospace specific modules, including Aerodynamics and Flight Mechanics as well as Aircraft Structures and Aeroelasticity. There were also modules that expanded on the knowledge gained in the first year including second modules in Thermodynamics, Fluid Mechanics and Solid Mechanics as well as a module called Control which elaborated on the systems involved with electronics. There were also practical modules in this year including an experimental project and a design project. The design project entailed designing, building and testing a model aircraft to achieve certain goals set by the university. In this case the aircraft would need to be fixed wing (i.e. a plane) and be able to carry the largest payload possible for its category. Due to COVID-19 both practical modules were cut short, and unfortunately the aircraft designed was not built.

In his the third year Scott carried out two yearlong projects and four shorter modules. The short modules included Turbomachinery, Space dynamics, Aerodynamics, and a management module. The first yearlong project was to complete a preliminary design of a family of commercial aircraft capable of carrying 240 and 190 passengers. This module was completed as part of a team and included CAD drawings and FEA of the final design. The second yearlong project was to create a 4kg UAV with the largest possible range. This project was meant to be built and tested but due to the COVID-19 pandemic it was just designed and optimised as much as possible.

Scott will soon be returning to St Helena to seek employment.

“I am happy to have completed my studies and I can’t wait to start the next chapter in my life.”

“Congratulations are extended to Scott on this excellent achievement. He has made us all proud. We now look forward to his return and to supporting him in the next stage of his career for the benefit of his learning and development and St Helena. ”