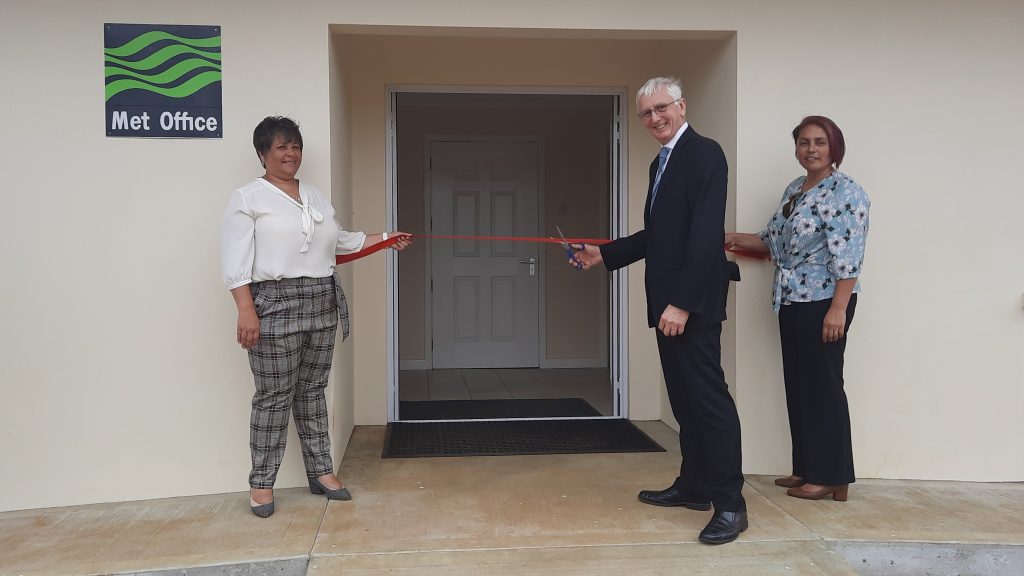 HE Governor cutting the ribbon

During the Ceremony, HE Governor delivered a speech and said:

“This Met Office Station has been located here since 1976 after moving from its old location at Hutt’s Gate. Throughout this time, it has steadfastly collected global climatic data from observations and the launches of balloons and fed the information back to the UK.

“In 2011, an MoU between SHG and the Met Office updated and redefined the role of this station. Importantly, this was re-signed in 2021 and I would like to draw out two features from the new MoU. First, it paved the way for funds to become available to construct this new building and second, it reaffirmed the long term commitment of the Met Office to St Helena for all being well the next 40 or more years.”

Governor Rushbrook then declared the Operations Building open with the cutting of the ribbon.

Following the Ceremony, invited guests were given a tour of the Meteorological Operations Building by Met Station Manager, Lori Bennett, and were shown the systems operated at the Station.

Invited guests then viewed the weather balloon being launched at 11.15am and Lori explained the process and the importance of how the weather balloon data filters into the global network of climate observations and plays a key part for climate studies whilst being beneficial to Aeronautical Forecasting provided at St Helena Airport.

“A special mention too goes to Marcos Henry, the Technical Manager at this Station. He has racked up continuous long service here since 1976. As a school leaver, he found his vocation at Bottom Woods. We recognise and pay tribute to his 45 years, and counting, of service. A remarkable achievement for him personally and the work of this Station.

“I want to also give special thanks and mention to Karen McCourt, a Manager in International Relations at the Met Office in the UK. She negotiated for the funds to build this new Station, project managed its completion from the UK end and agreed to donate the ‘Portakabin’, used for four years after the old building was demolished, to Girlguiding in their 100th year of service to our Island. Without her commitment, we would not be here today.”

Whilst projects like this one usually involve many stakeholders: all of whom will have played a vital role to achieve a shared goal, they often consist of key people that make things happen and this project has been no exception.

I therefore wish to acknowledge the significant contribution by those key people that have brought us here today. Notably: