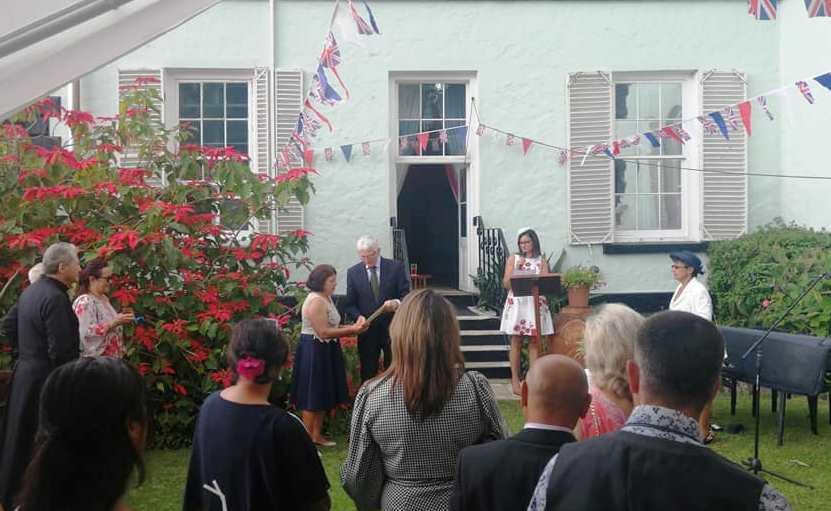 His Excellency Governor Philip Rushbrook hosted a Garden Party at Plantation House to mark the 95th birthday of Her Majesty Queen Elizabeth II on Saturday, 12 June 2021.

“We were unable to hold this event last year due to the uncertainties of the global pandemic. So being here today is a clear indication of the achievements made by the island’s leaders, public servants and many others in responding to the challenges of Covid19. The last 15 months have been a trying and unusual time for all of us. We should take this moment to give thanks to our healthcare staff and the behind-the-scenes work by colleagues in St Helena and Britain for an amazingly successful rollout of vaccines. Around 97% of the adult population is now fully vaccinated meaning we should be able to maintain as much of a normal way of life as possible, whatever the future may bring. Defining the path ahead for St Helena is the next step as the world moves beyond lockdowns.”

The Governor then announced the recipients of the Badge of Honour, Valerie Yon and Barbara Osborne.  His Excellency also stated that the Queen’s Birthday Honours List had been published the evening before and this year, British Empire Medals were bestowed upon Geoffrey Benjamin and Patrick Henry.  Geoffrey for his contribution to the development of biomedical testing services on-Island, which are a crucial part of the Island’s Covid19 protection measures and Patrick Henry for his dedicated services to sports on St Helena. The Governor stated that the honour was richly deserved by both and they would receive their medals at ceremonies in the coming months.

The theme for the Queen’s Birthday this year was respecting our environment and improving it for the future. The late Duke of Edinburgh was a passionate advocate for the environment. A video demonstrating the Prince of Wales’ commitment and concerns about the planet’s health was shown throughout the afternoon. The video was accompanied by five stands highlighting the local organisations that contribute to the local environment and cultural protection and conservation: SHG Terrestrial Conservation; St Helena National Trust; SHG Environmental Management; Museum of St Helena; SHG Marine Management.

The Governor also announced that the Island had just received additional funding from the UK Government to support environmental projects on-Island, these include equipment for a waste recycling facility, a natural lighting demonstration to replace electrical lighting, and a sizeable contribution to the restoration of St Helena’s cloud forest. In total, the new environmental funding for this year was over one million pounds.

The day concluded with guests mingling and enjoying live music provided by the Salvation Army Band with the Get Together Orchestra and singing and music from Creative Saint Helena.