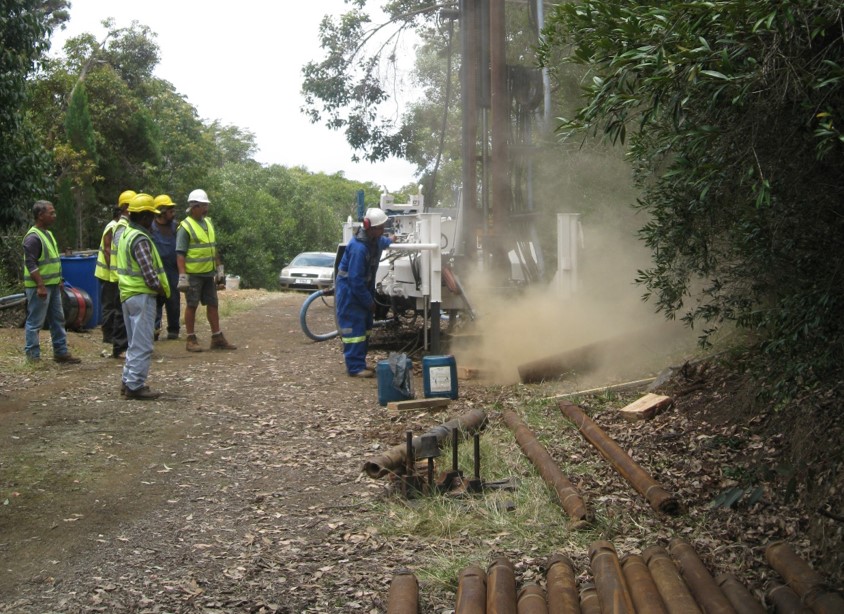 In the last update in November 2020, the Programme Management Unit (PMU) informed that works with regards to the Exploratory Boreholes and Groundwater Drilling Project had been temporarily suspended pending receipt of additional equipment.

As with the first borehole, the target depth to find water in borehole two was 70-80 metres below the existing ground level. Taking on-board lessons learned during the drilling of the first exploratory borehole late last year, certain aspects of the drilling operation was changed to best mitigate some of the apparent issues with the drilling rig, this resulted in a slower drilling progress. Despite this, problems were still being experienced with the drilling rig’s hydraulics, compressed air flushing system, and the engine’s torque.

After slow but steady progress to a depth of 37 metres the drill string once again became jammed. Fortunately, this time, Henry’s Contractors managed to free the drill string, but it was apparent that various aspects of the drilling rig’s systems were struggling to reliably drill beyond this depth.

Subsequently, PMU met with Henry’s Contractors on site to complete a detailed appraisal of the drilling operations, particularly the ability of the drilling rig to drill reliably beyond a depth of 40 metres. After drilling another few metres to a depth of 42 metres, PMU decided to suspend drilling operations as the unlikelihood of successfully drilling to a depth of 70-80 metres to find water without suffering another jammed and irretrievable drill string became clear.

The contractor was therefore instructed to cease drilling operations, recover the drill string, make the site safe, and demobilise.

Henry’s Contractors are thanked for their dedication, hard work, and perseverance in doing all they could to drill to the required depth with the equipment available. Thanks are extended to Connect Saint Helena for the loan of the drilling rig and compressor and also to the St Helena Airport Project for the loan of a compressor at a key point in the programme.

The principle of solving the short-term water shortages in the Red Hill area via boreholes around Francis Plain remains strong. Unfortunately, the equipment currently available on-Island is unable to drill reliably to the depths necessary. PMU will now reassess with a view to progressing the Exploratory Boreholes and Groundwater Drilling Project under the auspices of the Water Strategy.