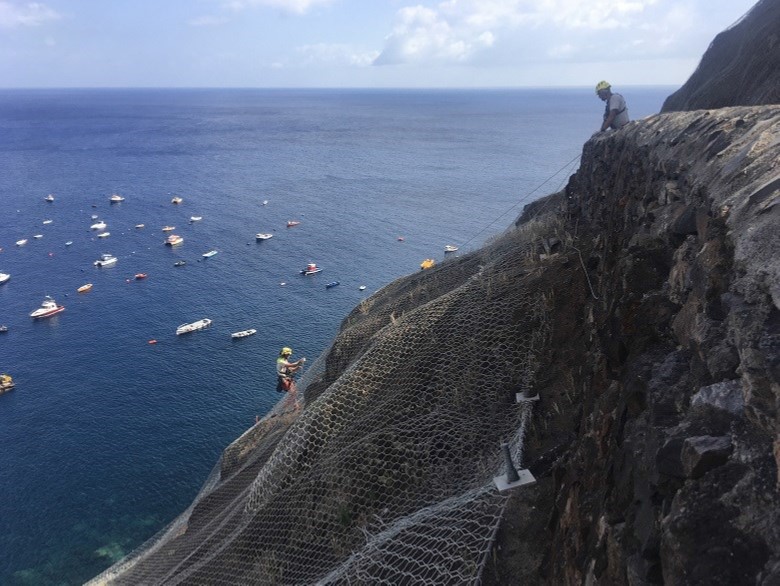 Many residents on St Helena still remember the first phase of rockfall protection works at Jamestown Wharf. In 2008, CAN France installed rockfall netting above and below Munden’s Path to protect Wharf users from large rockfall, which had plagued the Wharf since its construction. The netting has worked well, with no large scale rockfall on to the Wharf for 12 years.

However, due to deterioration of the Munden’s Path wall, there is a risk of blocks falling from the wall – with a block recently impacting the Customs Freight Terminal building. So after a 12-year interlude, CAN France has now returned to Jamestown Wharf to build a bespoke lightweight catchfence, just below the wall. The fence will extend from the Customs & Port Control building to the Coal Yard – a total of 360m.

Due to the potential for objects to be dropped from height during construction, restrictions on Wharf activities are necessary. A shuttle bus is in place to safely transport Wharf users from the first barrier to the end steps. Traffic marshalls will also direct Wharf users to safe zones, particularly during drilling and helicopter operations.

The fence, located above the lower African Graves site, was installed on 28 April 2020. Not even a month later, it was put to the test on St Helena’s Day. Following around three hours of intense rain, rocks came tumbling down the hill from Saddle Battery Ridge, and impacted the barrier. Olivier Merchat, the JET Systems mechanic, witnessed the event while enjoying his morning coffee! The fence retained all the blocks and sustained only minor damage.