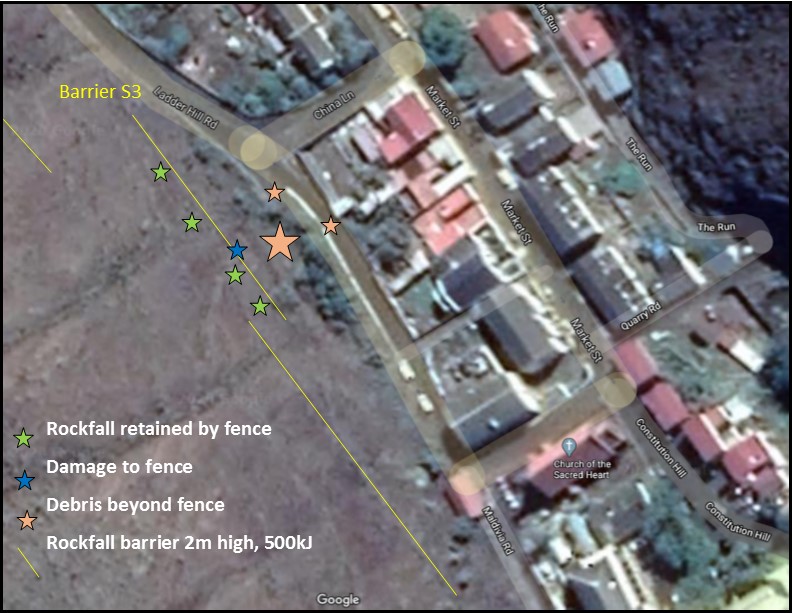 Following heavy rain a six tonne rockfall occurred on China Lane on Friday, 10 July 2020. Around two tonnes of material reached the rockfall barriers above China Lane, with the remaining debris coming to rest on the slope.

An inspection on site showed that the majority of debris was retained by the rockfall barriers, which were built in 2010. Using information gathered from the rockfall site, it appears that as the blocks broke up, one piece impacted near the top of rockfall barrier S3 (see image below).  The block punctured through the net, and came to rest on the grassy slope downhill of the fence. A second piece of rock bounced as it broke up, impacting the overhead telephone line and coming to rest on the downhill side of the fence.

The barriers are designed using rockfall trajectory modelling combined with on-slope mapping of hazards, and take into consideration the blocks breaking up into smaller pieces which is a known occurrence during rockfalls on St Helena.  However, all rockfall events have outliers whose behaviour is more extreme.  These outliers account for less than 5% of the overall rockfall event volume.

The rockfall barriers are designed to provide a significant risk reduction, reducing the velocity of the majority of blocks reaching the barrier.

The rockfall barriers therefore achieved the design objective of substantially reducing the risk posed to people and property at the bottom of the slope.  The rock guards will be repairing the broken fence panel in due course.