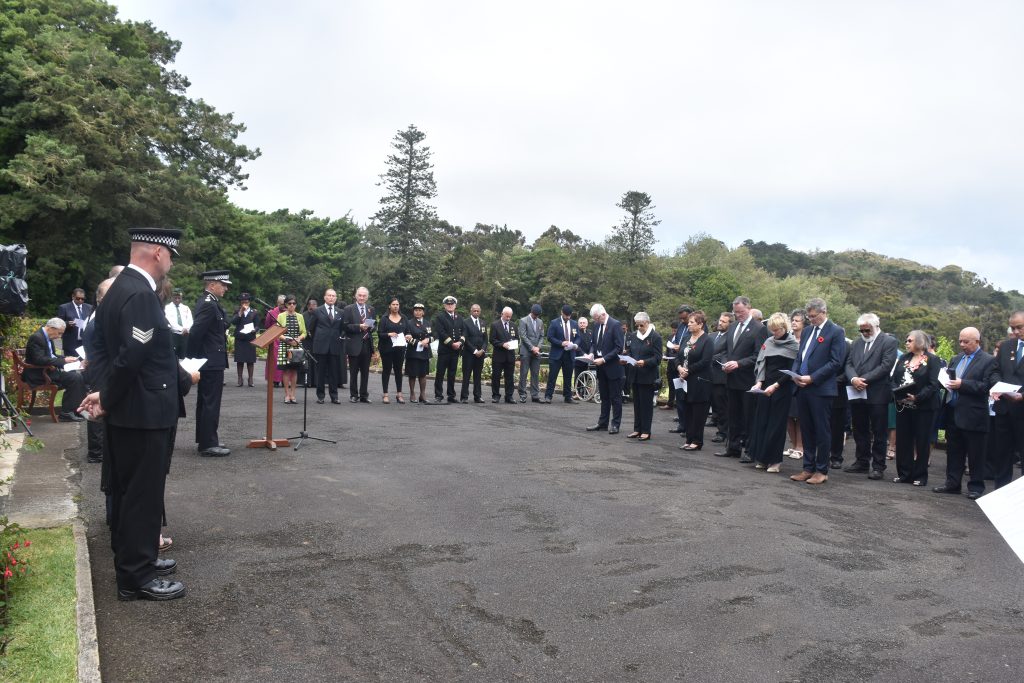 A Remembrance Day Flag Ceremony, to mark the moment in World War 1 when the guns fell silent on the 11th hour of the 11th day of the 11th month and to honour all who have served, was held at Plantation House on Wednesday, 11 November 2020.

His Excellency Governor Dr Philip Rushbrook welcomed everyone to the Ceremony and gave a message of remembrance. HE Governor ended his address to the former members of the armed forces and merchant navy with a profound passage from a remembrance event in Canada:

“As we stand here in peace and safety, we pay our respects to all of the fallen, all of the wounded and all who served in conflicts over the last 100 years. Today, as we should every day, we remember those who volunteered, sacrificed, served, fought and died for our future. We thank you, we salute you as we salute those who made the ultimate sacrifice for our freedom. We will never forget. We will remember you.”

During the flag ceremony, Fr Jack Horner and Sgt Joseph  Phippard read ‘In Waters Deep’ by Eileen Mahoney. The Right Reverend Lord Bishop of St Helena Dale Bowers MBE gave an address and Deacon Ernst Fritz led the event in prayer. Deacon Jonathan Green said a remembrance prayer before the two-minute silence was observed, signalled by the Last Post which was solemnly played by Mr Graeme Beckett. During the two-minute silence, the Governor’s Flag was lowered to half-mast as a mark of respect to all, military personnel and civilians, who have died in conflicts. This was followed by a reading by Mr Nigel Dollery of Robert Laurence Binyon’s ‘For the Fallen’. Mr Mike Durnford, Ms Rawena Delaney & Acting Director of  Police, David Price, read ‘In Flanders Fields’ by Maj John McCrae, and the ‘The Power of One Poppy’ by Emilia Neale was read by Mrs Patricia Williams and Major Priscilla Ziqubu. The Honorary French Consul, Michel Dancoisne-Martineau MBE, gave an address of international collaboration and remembrance.

The Ceremony concluded with an address emphasising the importance of hope and a Blessing by Father David Musgrove.

Ex-service personnel and Island representatives were then invited to a reception in Plantation House.