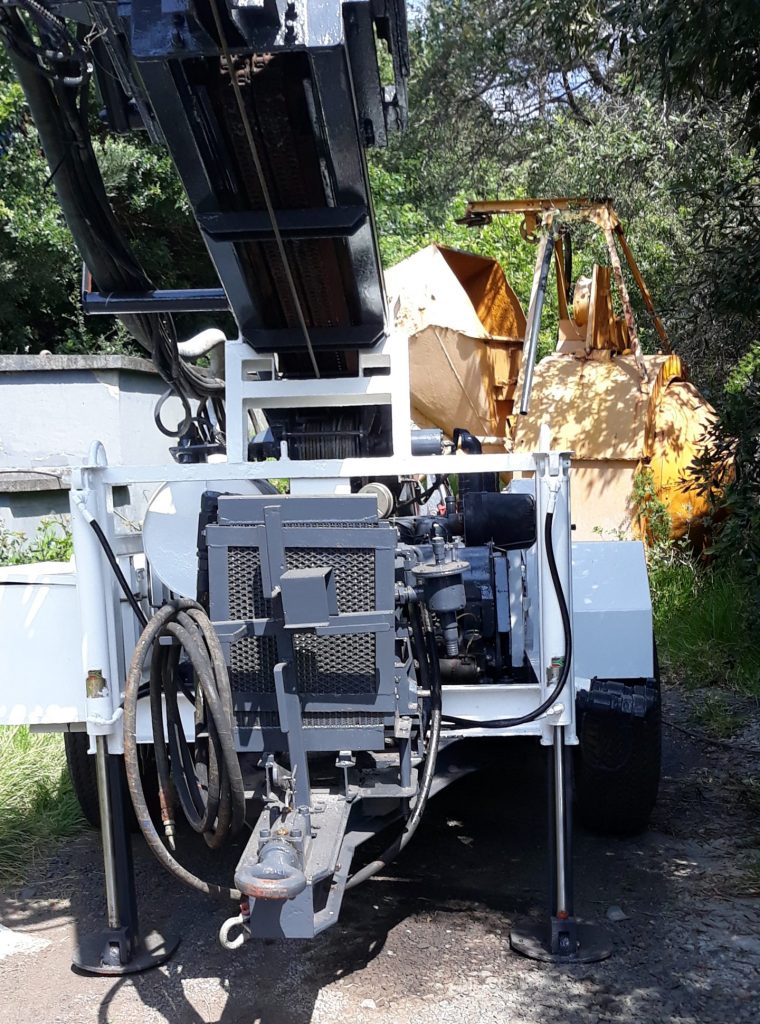 310WW Trailer Drill Rig provided by Connect for the Project

St Helena has experienced and been affected by serious periods of drought in recent times, the latest just last year in 2019 – following similar periods in 2013 and 2016. Climate change models suggest that St Helena will become significantly drier in the future, so further droughts are likely. The Island needs to respond to these changing circumstances in order to provide resilient future water supplies for the needs of domestic consumers, businesses and agriculture.

St Helena’s recent responses to drought conditions have been to bowser or pump water from catchment areas where supply has remained sufficient, to those areas where demand has exceeded supply. Both of these methods are expensive and unsustainable, and do not coincide with the objectives of the draft Water Strategy in terms of achieving resilient and affordable water supplies.

To mitigate the effects of any future dry periods on St Helena, a cost-effective way of finding an additional 500 cubic metres of water per day in the Red Hill catchment area is needed. This is the reason for the Exploratory Boreholes and Groundwater Drilling Project in the vicinity of Francis Plain – a jointly funded project between St Helena Government and Connect Saint Helena Ltd.

Initially, two options were considered by the Programme Management Unit (PMU) as possible solutions to find 500 cubic metres of water per day to address the freshwater shortages experienced during drought periods:

In the medium to long term, significantly more water will be required to support St Helena’s potential increase in population and business activity against the backdrop of less rainfall due to climate change.

The only 100% reliable source of water available at all times for St Helena is the surrounding sea. Because of this, it is likely that desalination will become an increasingly attractive additional option for water supply in the future. The technology surrounding desalination has progressed dramatically in recent years, including the incorporation of renewable energy. All of this has resulted in the cost of desalinated seawater now being competitive with other methods of potable water supply.

In the meantime Executive Council approved for the commencement of the groundwater exploration works in the Francis Plain area, to proceed because if sufficient groundwater is found, it can be quickly developed to supplement the Harper’s raw water storage feeding the Red Hill Treatment Plant.

Finding potential sites for this Exploratory Boreholes and Groundwater Drilling Project involved extensive research of many previous geology and hydrology reports written on St Helena. The conclusions of these reports were correlated and interpreted with respect to the Island’s available water resources. This information was then combined with data collected from numerous site visits.

This research and data collection indicates that besides the perennial surface flows that run into Jamestown via Briars Gut, groundwater fed from the central peaks also flows through the bedrock along the main volcanic shield and ends up in Jamestown. The spring at Drummonds Point is evidence of an abundance of water held in the bedrock. The main raw water that is collected in the Jamestown distribution system comes from these sources. The surface water that previously flowed freely through Harpers over Heart Shaped Waterfall was intercepted when the Harpers Earth Dam was built, with only the overflow from the dam now ending up in Jamestown. Field research indicates that the subterranean flows are split at Lemon Tree Gut with strong flows beneath Barren Hill and the Briars to one side, and Browns Hill and Francis Plain to the other side. It is hoped that the exploratory drilling will prove the Browns Hill and Francis Plain flow. It is highly unlikely that drilling boreholes on the Francis Plain Ring Road will affect the existing groundwater flows into Jamestown.

Water seeping from the layers of rock in Cat Hole, Heart Shaped Waterfall, and the area known as the Rushes under High Knoll is evidence of currently untapped subsurface flows existing under Francis Plain and the surrounding areas. The seepage above the old donkey trough on Barnes Road is further evidence that large subsurface flows exist in the Peak Hill and Barren Hill aquifers.

Historical data, maps and walkover surveys were used to inform this Project and help identify potential water-bearing aquifers close to Scott’s Mill on the Francis Plain Ring Road. Specific field data from the successful boreholes in Dry Gut (developed for the Airport Project) were also used to calibrate the water divining techniques utilised in this Project.

During periods of drought, Connect pumps raw water from Hutt’s Gate to Harpers to supplement the supply to and from the Red Hill Treatment Plant. If an abundance of water is found below the Francis Plain Ring Road (similar to the yields from borehole 5 in Dry Gut), then these boreholes will be made operational by Connect, replacing the need for pumping and bowsering. If sufficient groundwater is not found in this area, seawater desalination for the Red Hill catchment area remains a viable option for the additional supply required.

With approval for the exploratory drilling to go ahead, the PMU will now engage a local contractor to carry out a drilling test to assess the performance of the 310WW Trailer Drill Rig provided by Connect for the Project. Once the test drilling has been successfully completed, the main exploratory drilling will go ahead as planned under the supervision of Alan Hudson.

The public will be kept updated as this Project develops.