The Health Directorate is developing its offering of Smoking Cessation support following on from recommendations in the recent survey on Smoke Free Government.

Supporting smokers to quit and creating an environment that supports quitting and deters people from starting is a key strategy under the Island’s Health Promotion Strategic Framework (HPSF).

Residents wanting to ‘get free of smoking’ now have the following expanded cessation options available to them: 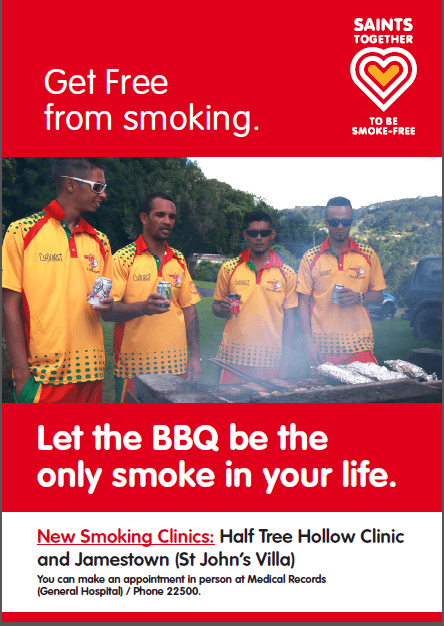 The Health Directorate is now providing Smoking Cessation Clinics at both the Jamestown and Half Tree Hollow clinics.

Clinics in Jamestown will take place at St John’s Villa every other Thursday from 2pm-4pm starting on 7 March 2019.

Clinics in Half Tree Hollow take place every other Tuesday from 2pm-4pm.

Clinics are by appointment only and can be booked via the Medical Records Office at the General Hospital on tel: 22321.

SHG employees who smoke and would like support to quit can attend a smoking cessation appointment during working hours.

The numbers of total Nicotine Replacement Therapy (NRT) and cessation advice or support from a health professional is now nearly 140. Data will be available later in the year which will indicate how the cessation support has contributed to the number of people who have quit smoking.

During 2019, further work will be undertaken to strengthen the smoking cessation support available in the community.

Smoking is one of the leading preventable causes of non-communicable diseases such as heart attack, stroke, cancer, type two diabetes, and chronic obstructive pulmonary disorder (COPD) which are responsible for a large part of the chronic illness, disability and earlier death in the St Helena community. One fifth of Saint adults smoke (census 2016 and 2018 survey data) and the number is higher in certain age groups.

Since introducing ‘Smoke Free Government’ on 1 July 2018, smoking cessation advice and support was started by the Health Directorate and all community member smokers who wish to quit are entitled to a free four-week appropriate Nicotine Replacement Therapy (NRT).

Reduced second-hand smoke and encouraging smokers who want to quit, were described as benefits by people who took part in the recent ‘Smoke Free Government’ survey.