In this bulletin: estimates of arrivals, departures, and the total population

The focus of this Statistical Bulletin is arrivals and departures to and from St Helena, especially by air; St Helena’s first regular scheduled air service began more than a year ago on October 14, 2017.

The primary source for the statistics in this release are records collected by the Immigration Office of the Police Directorate for arrivals and departures, and the Customer Service Centre at the Post Office for births and deaths. A full set of statistics and indicators can be downloaded in Excel format from the ‘Population’ file on the St Helena Statistics website at: www.sainthelena.gov.sh/statistics-data.

People arrive on St Helena either by ship, by yacht, and – since the construction of St Helena’s airport in 2016 – by air (note that day visitors from cruise ships are not included in statistics on passenger arrivals, although they are included in Table 1 for completeness). For the one year period October 2017 to September 2018, excluding cruise ship passengers, 5,235 people arrived at St Helena altogether. This is a record number of arrivals in recent times; the next highest number since 2010 was 4,205 in 2014/15, for the same October to September period.

Purpose of visit of arrivals by air

The purpose of visit of all persons arriving on St Helena has been classified as either returning resident, business, tourism/holiday, or in transit. Within tourism/holiday, there are two groups: St Helenians who usually live abroad but who return for short periods typically to visit family and friends, and other nationalities (i.e. non-St Helenians).

Around half of all arrivals by air were for tourism or holiday (1,650 people or 49%) and just under half were arrivals of returning residents or those coming for business or employment (1,538, or 46%). It should be noted that these figures do not include a full year of commercial air operations because the service started in the middle of October; for a full year (365 days) of commercial flights, the first two flights of October 2018 would need to be added.

Chart 4 illustrates arrivals by air by month; the typical seasonal pattern of non-St Helenian tourists is quite pronounced, but the pattern of St Helenians arriving for holiday visits over the past year by air has been quite different, with the most popular month being July. This coincides with the UK summer holiday season, but it is also likely that many St Helenians abroad chose to use the RMS St Helena over the 17/18 Christmas period, while the service was still operating. 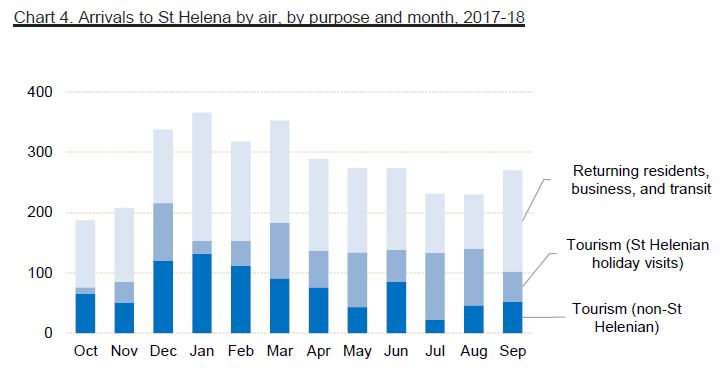 Length of stay of tourist/holiday visitors arriving by air

The average length of stay has been calculated for those arriving by air for tourism or holiday purposes, and with a stay of less than six months. Only those visitors that have left are included; this helps exclude those that might arrive initially for a short period for a holiday, but who stay for much longer.

Another measure is the total number of nights spent by the different groups of visitors, calculated by adding together the length of stay of each visitor that left. St Helenians visiting on holiday and arriving by air spent just under 17,000 nights in total on St Helena between October 2017 and September 2018, compared to just over 9,000 nights in total by non-St Helenian tourists – even though there were more arrivals of non-St Helenian tourists. This is because St Helenian visitors stayed longer, on average. From the total nights spent, it is possible to derive an average for the number of people on St Helena each night, by dividing by the number of days in the year (365). The average persons per night for those arriving by air for tourism/holiday was around 72, with 25 tourists and 47 visiting St Helenians. Like all averages, this does not measure the actual number of people on St Helena on every night of the year – on some nights, there would have been more, and some nights less.

Characteristics of arrivals for tourism/holiday

Charts 6a to 6c show various characteristics of tourism/holiday visitors that arrived by air in the last 12 months. There were slightly more men than women, and almost 70% were 40 or older. Apart from St Helenian, the most common nationalities were British, South African, and French (20%, 17% and 3% respectively). 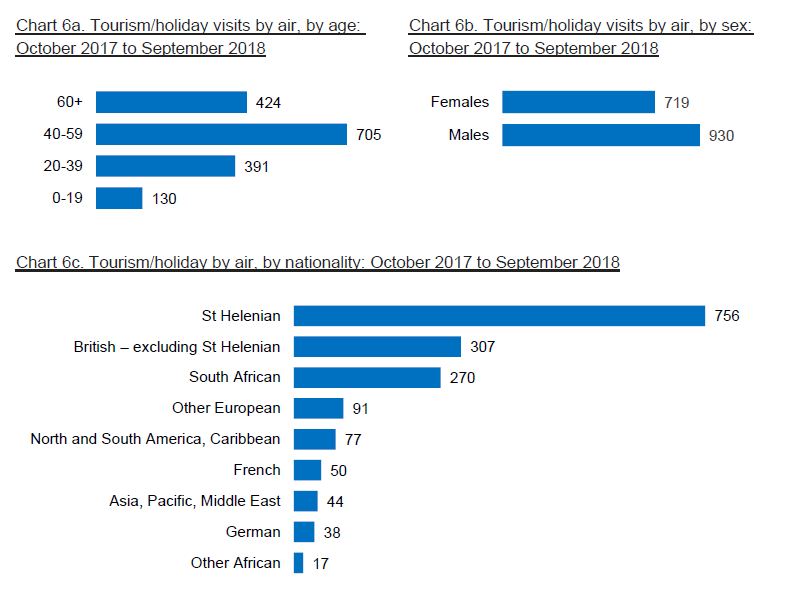 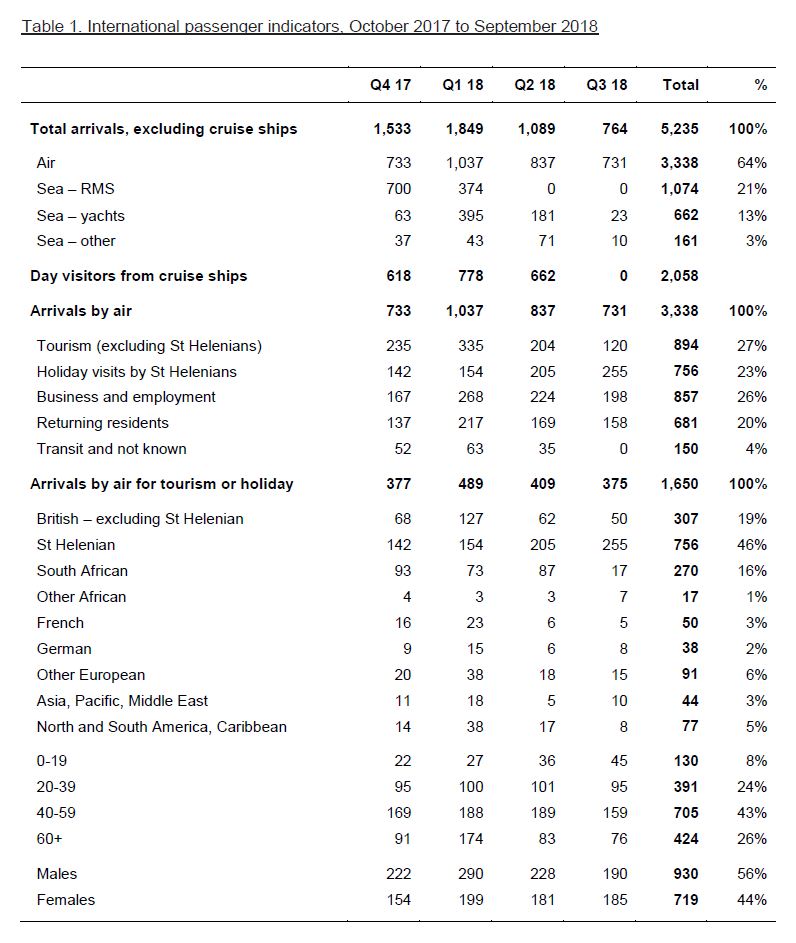 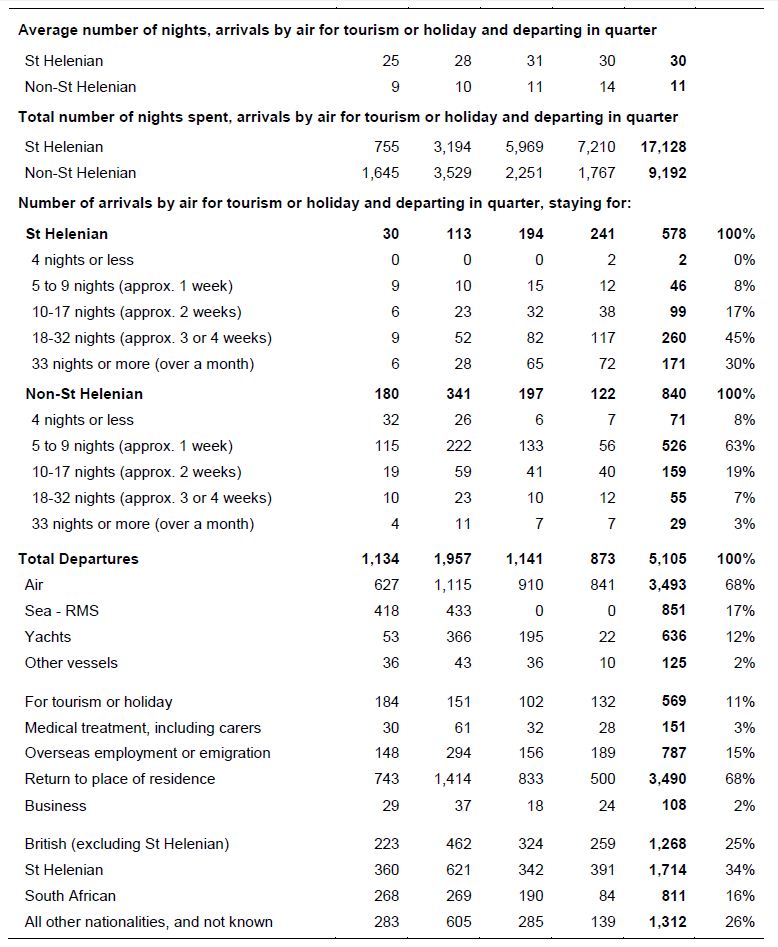 There were two births between July and September, the lowest quarterly number recorded since at least 2010. It brings the total number of births so far in 2018 to 15. There were seven deaths in the third quarter of 2018, which was also very low compared with recent trends. 33 deaths have been recorded to date in 2018 – more than double the number of births. Statistics on births and deaths are derived from records maintained by the Customer Service Centre, St Helena Post Office.

The Statistics Office aims to constantly improve the quality and usefulness of the statistics it produces. For this release, new series have been calculated for 2017 and earlier, to distinguish St Helenians visiting on holiday from other tourists.

Two adjustments have also been to improve comparability between the statistics derived from the new data management system introduced by the Immigration Office in January 2018 and the previous system. The first adjustment is that St Helenians returning for a short term holiday visit from overseas employment have been categorised within the tourism/holiday grouping as St Helenians returning for a holiday (they had been previously categorised as returning residents). The second adjustment is that persons arriving on a yacht have been uniformly classified in the transit category, unless their destination was St Helena.