After a rather quiet weekend on patrol, week five of the seven-week Initial Police Training course got underway with the students having a recap of some useful legal definitions.

Tuesday saw a full day of Personal Protection Training where the students were put through their paces practising baton strikes, handcuffing, and some unarmed manoeuvres.

On Wednesday the students started to put all their training together with a scenario of dealing with an incident, escorting the suspect to custody, booking them in and then searching the property looking for stolen/prohibited articles. Once they found the items, they were exhibited, bagged and tagged. 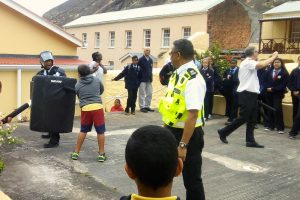 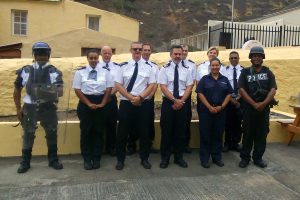 An Open Day was held on Thursday at Police Headquarters, Coleman House, in Jamestown, by the students. This attracted many children from the Island’s schools as well as members of the public. Visitors were able to experience the ‘drunk’ goggles, have their photograph taken in the ‘photo booth,’ have their fingerprints taken, and even explore a ‘crime scene.’ They were also able to have a go using a practice baton against PC Sebastian Williams, much to the excitement of the younger school children.

The Open Day was a fine example of teamwork and Community Policing by the students, with a special mention to PC Wendy Van Rensburg for demonstrating her organisational skills.

The students now move into their final two weeks of training.