A special marchpast of uniformed contingents took place on the Grand Parade at 10am to mark the tenth anniversary of Chief Justice Ekins’ appointment as Chief Justice of the Supreme Court of St Helena.

The official opening of the Supreme Court commenced as His Lordship, the Chief Justice, Charles Ekins Esq, entered the Courthouse accompanied by the Sheriff of St Helena, Mrs Ethel Yon OBE, and Bishop Richard Fenwick. Lawyers, Justices of the Peace, officials, and members of the public were also in attendance.

In his speech, the Attorney General said:

“This is a special occasion.  It marks the 10th anniversary of your appointment as Chief Justice of the three territories.  And it would be fair to assume that in this decade of service, my Lord has seen significant changes – my Lord was appointed when the previous Constitution was still in force, and there has been a number of legal reforms and different actors since, including a succession of Attorneys General.

“This is a special occasion for me as well, my Lord, as it is the last time I will be addressing you in my capacity as AG for the territories.  After two and a half years on St Helena, it is time to move on. Ms Sara O’Donnell has been appointed Attorney General Designate.  Ms O’Donnell returns to St Helena next week. Upon my departure on 27 January, she will be made Acting Attorney General.  I will remain AG until the end of my contract in mid-March but Ms O’Donnell will conduct the every-day management of Chambers. I am certain that Chambers will continue to grow under the leadership of Ms O’Donnell.”

This was followed by an address from the Chief Justice, who said:

“As previewed in the press, this marchpast recognises the 10th anniversary as my appointment of Chief Justice of the St Helena Supreme Court, an anniversary that was reached in August of last year. This will be the third time the opening has been attended by a marchpast, and I extend my heartfelt thanks to all involved.”

Civil and Criminal cases will be heard by the Supreme Court until Friday, 26 January 2018. 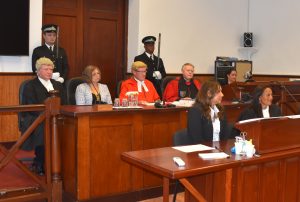