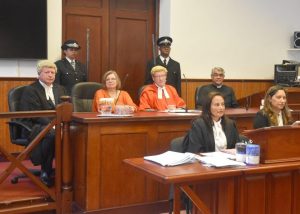 The Supreme Court of St Helena was formally opened on Monday, 22 October 2018.

The official opening of the Supreme Court commenced as His Lordship, the Chief Justice, Charles Ekins Esq, entered the Courthouse accompanied by the Sheriff of St Helena, Mrs Ethel Yon OBE, Bishop Elect, Dale Bowers and Chief Magistrate, Nicholas Aldridge. Lawyers, Justices of the Peace, officials, and members of the public were also in attendance.

Attorney General, Sara O’Donnell, welcomed the Lord Chief Justice and introduced new members to the Supreme Court including the Solicitor General and the Public Solicitor and welcomed back Andrew Jackson. The Attorney General went onto acknowledge the valuable contribution to the administration of justice made by members of her Chambers, the Public Solicitors Office, the Lay Advocates, the Probation Service and the Court staff.

In her speech, the Attorney General said:

“This is the first occasion that I address this court as Attorney General and it is indeed an honour that I do so. I have taken an oath that I will well and truly serve HM Queen Elizabeth II, her heirs and successor, in the office of Attorney General and member of Legislative Council. I do and I will continue to undertake my duties with regards to my oath seriously and I wish to serve St Helena to the very best of my ability and skill and to uphold the Constitution and the laws of this Territory.”

This was followed by an address from the Chief Justice, who said:

“When I was first appointed as Chief Justice, and in terms of qualifying staff, the Attorney General’s Chambers comprised of the Attorney General and one Crown Council. The Public Solicitor’s Office comprised of the Public Solicitor. I think that I’m right in saying that one doesn’t have to look very much further back into history to a time when, other than the Attorney General, Lawyers were banned altogether on St Helena. Happily the emphasis that we place now on the concept of justice, and the rights of the individual, requires a less simplistic approach. The comparative sophistication of the operations that you, Attorney General and Public Solicitor, are responsible for, reflect the very many positive ways in which St Helena has developed even in as little as eleven years. Collectively the Supreme Court, the Magistrate Court, the Attorney General’s Chambers each has a responsibility for advancing above all the interest of justice for the community of St Helena and I am confident that this is a goal that which we will all continue to achieve.”

Civil and Criminal cases will be heard by the Supreme Court until Friday, 2 November 2018.