Yesterday, Monday 22 January 2018, saw the start of the Commonwealth Parliamentary Association’s (CPA) Post-Election Seminar with the Opening Ceremony taking place in the Council Chamber at 9am.

Opening remarks were made by the Speaker of the House, the Hon Eric Benjamin. He welcomed members of the CPA Resource Team, and spoke highly of the relationship between the CPA and the St Helena Legislative Council.

“Hon Members will be fully aware that over the past years the benefits we have received as members of this great CPA have been many, not only in training which it continues to offer us, but also in many other material benefits too, some evident in this room.”

The Speaker’s words were echoed by Her Excellency, Governor Lisa Phillips, who added:

“The relationship between St Helena and the CPA is important in providing a platform to develop good parliamentary practice within the UK Overseas Territories and to share good practice with other similar legislatures across the Commonwealth.”

Governor Lisa then reflected on the General Election 2017 and praised the Island’s commitment to democratic ideals and standards. She made mention of the election of women to Legislative Council which she said signified a strong commitment to gender equality and the importance of women’s political leadership on the Island.

Following on from the Governor, Councillor Derek Thomas then spoke about his time serving as a member of the CPA International Executive Committee. He mentioned his gratitude to the CPA as it allowed him to develop relationships with other Parliamentarians around the globe, building interest in the development of St Helena.

Mr Khan expressed his disappointment at not being able to attend the Seminar and sent best wishes and personal thanks to the Speaker, his team, and the CPA Resource Team for their willingness to participate in the Seminar.

He congratulated the Island on a successful General Election in 2017 and stated that this is just the beginning. He said:

“Although the election campaign is now over, this is not the end of the road. To the contrary, it is the beginning. Election to this legislature signifies the beginning and continuation of parliamentary careers and, above all, service and responsibility to the people of this Island.”

Mr Khan went on to praise the partnerships between the CPA and the British Overseas Territories and said he looked forward to its continuation. He congratulated the Island on the start of a commercial air service and acknowledged the opportunity it brought for members of the CPA to learn more about St Helena.

He said about the Seminar:

“I hope this CPA Post-Election Seminar will in time be emblematic of the mutuality of learning between this Island and the rest of the CPA network and vice versa, which is so much part of the life blood of the CPA family.” 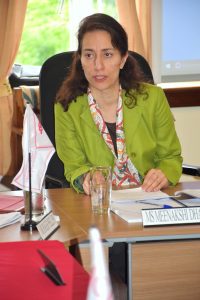 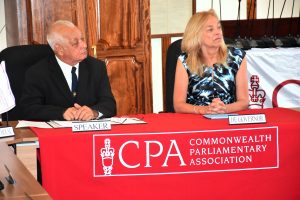 The CPA Post-Election Seminar will continue until Friday, 26 January, covering 14 sessions. These Seminars are aimed at building the capacity of Elected Members of Parliament so they function efficiently and effectively in the performance of their democratic duties.

The CPA Resource Team comprises of the Hon Barry House, former President of the Legislative Council of Western Australia, Mr Roger Phillips, Clerk of Tynwald, Secretary of the House of Keys and Counsel to the Speaker, Isle of Man, and Ms Meenakshi Dhar, Acting Head of the CPA Private Office. Unfortunately the Hon Niki Rattle, Speaker of the Cook Islands’ Parliament, who had planned to be a part of the Seminar, could not make the visit.

The Resource Team arrived on Saturday, 20 January, and was welcomed to the Island at a reception that evening at the Blue Lantern, hosted by HE Governor Lisa and the Hon Speaker.