Towards the end of May this year, a local fisherman spotted some wreckage washed ashore at Turks Cap Bay. Unfortunately, due to large swells, the fisherman could not get close enough to identify the wreckage. It was later reported to the St Helena Sea Rescue Service.

On Friday, 1 June, the Sea Rescue Service went out to investigate. On arrival, in Sea Rescue 3, sea conditions were again too rough to deploy someone ashore, therefore the directorate’s drone was flown from the boat to take aerial footage of the wreckage. The footage obtained indicated that the wreckage was part of the overturned hull of a boat.

Following the report from the Sea Rescue team, Emergency Planning Manager, Ian Johnson, and Emergency Planning Officer, Marco Yon, along with Sea Rescue Auxiliary, Paul Cherrett, hiked down to the beach to take a closer look and take further photos. The wreckage has now been identified as part of a catamaran, probably of South African origin. 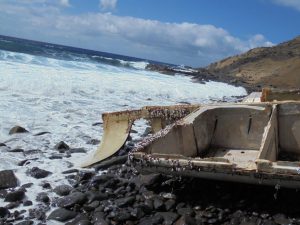 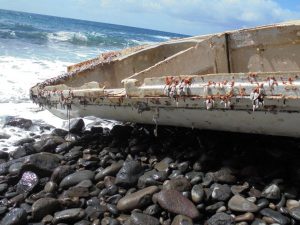 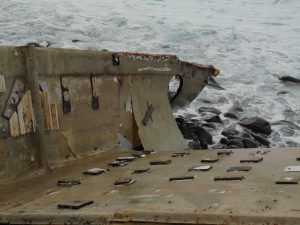 Further investigation is being carried out by the South African Sea Rescue Service to see if the boat can be identified.