A short Beacon Lighting Ceremony, in tribute to the millions of men and women who died or were injured in World War One (WW1) and to commemorate the centenary of the end of the Great War, was held at Kingshurst Community Centre on the evening of Sunday, 11 November 2018.

The Ceremony began at 18.50pm when Bishop Dale welcomed those in attendance. This was followed by the poem ‘Tribute to the Millions’ read by Nigel Dollery.

At 7pm, the Beacon of Light was lit by the Hon Deputy Speaker, John Cranfield, signalled by the Last Post played on buglers by Scout Leaders Dax Richards and Mark Yon.

During the ceremony, Father Jack Horner led a prayer and reflected on war times and the impacts on people. A Hymn entitled ‘He Who Would Valiant Be’ was also sung and Lieutenant Coral Yon read the poem ‘In Flanders Fields’.

The ceremony concluded with a blessing by Bishop Dale. 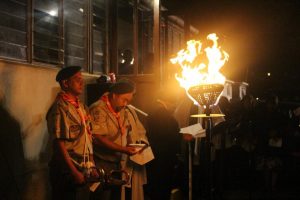 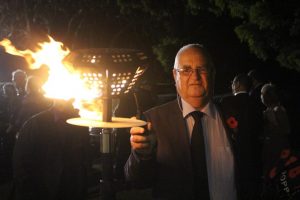