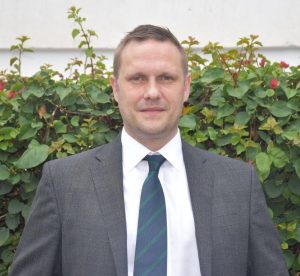 recently arrived on-Island to take up his role in the Attorney General’s Chambers.

“I am honoured to have been appointed Solicitor General.  I decided to take up this role due to its diverse and challenging nature. I was also persuaded by the opportunity to move with my family to such a friendly and fascinating Island. I hope to contribute to the achievements of the Island and its people over the next two years.”

“The Attorney General’s Chambers is delighted to welcome Allen as the new Solicitor General.  Allen brings with him a wealth of experience as a criminal barrister having worked not only in England but also in Kosovo. He is a valuable addition to the team and I very much look forward to working with him. My team and I wish him every success in his new role.”

Allen was called to the Bar in 2004 and practised as a Barrister in London. During the last five years Allen was seconded by the UK Foreign & Commonwealth Office to the EU Rule of Law Mission in Kosovo, where he worked as a Special Prosecutor.