Today, Councillor Thomas was the moderator for the Workshop on Climate Change. There were two Discussion Leaders followed by questions from the floor where countries were able to express specific issues and challenges affecting them. 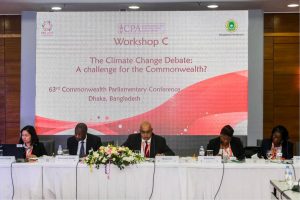 “Climate Change is a major issue to the planet which requires concerted action individually and collectively by Nations. Commonwealth Nations should therefore act urgently in their respective countries.”

Two actions were agreed at this morning’s workshop:

Both recommendations were fully endorsed and will form part of the Conference Concluding Statement which will be issued at the General Assembly.

Councillor Kylie Hercules stood in as an observer on the various workshops and was able to build working relationships and gain some valuable experience from the discussions.