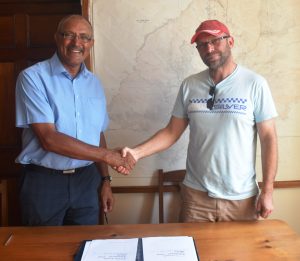 St Helena Government and South Atlantic Media Services (SAMS) has today, Friday 24 March 2017, come to an agreement on funding and conditions, meaning that SAMS can continue to trade beyond 31 March 2017 (see photo attached). The agreement will be for a three year period and will ensure that SAMS has a measure of financial security for the future.

The conditions attached to the proposal include a clause which reinforces SAMS’ ability to speak freely and independently of SHG at all times. This is one of the values which was built into the company’s business model from the outset.