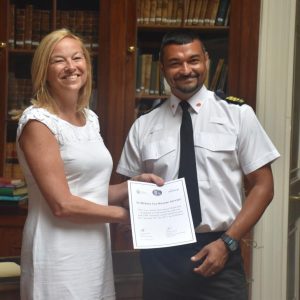 On Thursday, 2 February 2017, Governor Lisa Phillips hosted an awards ceremony at Plantation House, to recognise the efforts and achievements of the Sea Rescue Service Team, and for the successful completion of their training conducted by South African trainer, Graeme Harding, from the National Sea Rescue Institute.

For five weeks the Sea Rescue team received training, became accredited to operate further off-shore and received accreditation in VHF radio use. They also built on training covered in the initial course delivered in December 2015.

HE Governor Lisa Phillips and Chief of Police, Trevor Botting emphasised that the work of the sea rescue service is all about protecting individuals in the community, which can be a very difficult, but rewarding, job.

“This has been a gruelling five weeks of training for the sea rescue crew which maintains their excellence in what they do. They should be very proud that they have come through with flying colours. I know I am.” 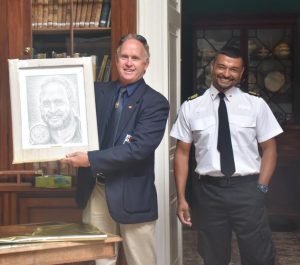 Chief of Police, Trevor Botting thanked everyone for attending. Thanks were extended to the Governor, Judi Leon, and Roy Burke and also to the Sea Rescue team for their hard work. Special thanks went to Graeme, for continuing to train the Sea Rescue staff.

“The work of the Sea Rescue Service will at times be challenging. It is important for the team to be well trained to meet all eventualities and sea conditions. The St Helena Sea Rescue Service is developing an excellent relationship with the NSRI, and Graeme Harding does a great job in delivering the training and accreditation to the team. St Helena should be proud of the team, who are a credit to the Island.”

Sea Rescue Manager, Simon Wade, then presented Graeme with a gift to say thank you, on behalf of the Sea Rescue team.

“Training is one of the most important things we need to always keep our eye on. Chief, your vision for this team needs to be applauded. I’ve been to 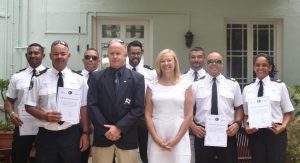 many places where the leadership is not as strong and they don’t have the knowledge of what needs to happen, but that is not the case here. I can’t wait to come and visit the team again with the boats in the new base.

“Thank you all for your efforts that were put into the last five weeks. Although we had fun, there was a lot of seriousness in the training. Until you see me again, stay safe, keep training, and be very proud of your team, because I am very proud of this team.”