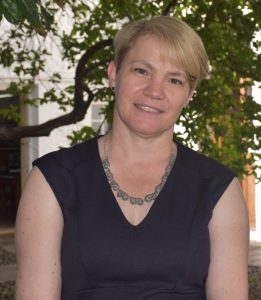 Crown Counsel (Community Care), Christine Cooper (photo attached), arrived on-Island on Monday, 29 May 2017, to undertake her new role within the Attorney General’s Chambers. Christine is here for two years and is based at the Castle in Jamestown.

“I hope that those people that need protection and assistance from the court will receive it and, as a result, will get a better quality of life.

“My post is a little different to that of the previous Crown Counsel, Laura McMullan, as she focused on child care and child protection. As procedures for dealing with children have got much better in recent years, there isn’t so much need for that anymore, but there is a wider need for vulnerable adults.

“As we have a lot of vulnerable people on the Island, other people want to do their best for them but don’t always know how to go about it. Vulnerable people need to be treated in the right way and be protected.”

“I am delighted to welcome Christine to Chambers. Christine comes with impeccable credentials and expertise in community care law. She has already got on with work quickly and efficiently. In the law reform front, Christine will advise on new legislation that the legislature may wish to consider in order to better protect the vulnerable on St Helena.”

“I already have a couple of cases that are active. I think some of the issues here will be the same sort of thing I’ve seen in London over the years, but then again, some of them will be different.

“I have met some of the people here on the Island, and they are really lovely, helpful and friendly. I look forward to meeting new people and settling down for the next two years.”

Christine has worked in England as a Barrister for ten years. Before coming to St Helena, Christine was based in Field Court Chambers in London. Among other qualifications, over the years, she has gained a Master’s Degree in Computing, a Law Degree which she studied at the University of Greenwich in London and a Master’s Degree in Law, which she studied in the London School of Economics.