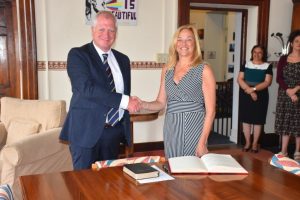 New Chief Magistrate, Mr Nicholas Aldridge, returned to St Helena today, Monday 29 May, and this afternoon was sworn in by Her Excellency Governor Lisa Phillips in the Governor’s Office at the Castle (see photo attached).

Nicholas took the prescribed Oaths in the presence of colleagues and his appointment is effective immediately.

As Chief Magistrate, Nicholas’ role will be to attend Magistrates’ Court proceedings, train and mentor Justices of the Peace (JPs) and the Officers who administer the Court system, and also carry out the role of Coroner, Land Registrar and President of the Media Commission, amongst other roles.