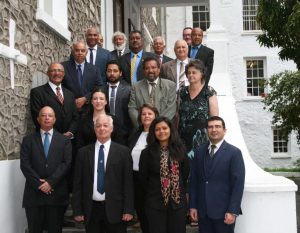 The inaugural meeting of the newly elected Legislative Council took place today in the Council Chamber at the Castle, starting at 10am.

The proceedings were opened with the entry of the President, Her Excellency Governor Lisa Phillips, followed by Prayers and the Administration of Oaths. Governor Lisa presided until the Speaker was elected.

Oaths and Affirmations were taken before the Governor, first by Ex-Officio Members, the Chief Secretary, Financial Secretary and the Attorney General, and then by Elected Members.

“The Airport will offer the opportunity for the 10 Year Plan to be achieved, but it will be up to you, as Elected Members, to ensure the benefits of the Airport are realised during the four years you are in office. Her Majesty’s Government in the United Kingdom will continue to work with you. Setting aside the Governor’s special responsibilities, I am quite clear that under the terms of the Constitution, it is Elected Members who drive this agenda on behalf of the people.  I am ready to work with you in a relationship that is cooperative, open, and effective.”

The following elections then took place:

Election of Speaker and Deputy Speaker

Eric Benjamin was elected as Speaker of the House, with John Cranfield as Deputy Speaker.

Elected Members were then asked to elect from amongst themselves Chairpersons for the five Council Committees. The following were elected:

Members of these committees will be appointed by Governor Lisa Phillips after consultation with the relevant Chairpersons.

Election of Members of the Public Accounts Committee

The final election was for three members to serve on the Public Accounts Committee. Members elected were Councillors Corinda Essex, Brian Isaac and Clint Beard.

The meeting closed at around 1pm following the customary Adjournment Debate.