OVER 20 YEARS OF SERVICE TO SHG 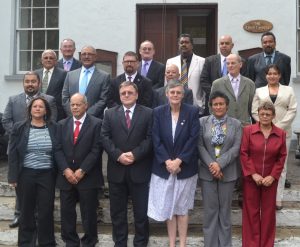 The late Mrs Margaret Hopkins MBE, better known as Cathy, gave over 20 years of service to St Helena Government as a Teacher, Legislative Council Member, Speaker of the House and SHG UK Representative.

Cathy was first appointed as a teacher in the Education Department in September 1980. She became a vital part of the teaching team and held positions such as President of the Teachers Association and Chairperson of the Schools’ Music Fund during her time.

As well as being a teacher, Cathy also became a Member of Legislative Council from 1989 until 1992.

She spent nine years working in Prince Andrew School (PAS) during which time she was promoted to Pastoral Head (Upper Age) in 1995.

Cathy held her position in PAS until May 1997 when she decided to move on from the Education Directorate. She replaced Dr Corinda Essex as SHG’s UK Representative in July 1997, based in London.

After nearly three years in the post, Cathy completed her time as UK Rep in June 2000. She returned to the Island later that year and, after twenty consecutive years with SHG, decided to take some time out to achieve a few personal goals.

Cathy’s love for teaching eventually saw her return to the role. She did a short stint as Supply Teacher at St Paul’s Middle School in 2001 and later in 2005 taught GCSE Music at PAS for four hours a week.

Cathy’s involvement with Government did not end there, she has also been the Speaker and Deputy Speaker of the House during which time she has presided over formal Legislative Council Meetings on a number of occasions.

SHG recognises the work and dedication of Cathy and sends our sincere condolences to her family and friends.

Cathy was an active and popular member of the Saint community and will be sorely missed.