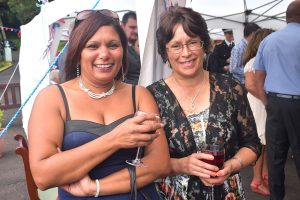 Her Excellency Governor Lisa Phillips, hosted the annual Garden Party to celebrate Her Majesty the Queen’s Birthday, at Plantation House, on Saturday, 17 June.

Invited guests included Government Officials, influential members of the community, the Prince Andrew School Student Council, and many others. Live music was provided by the ‘Get Togethers’ Orchestra.

At 3pm, Governor Lisa took to the podium to deliver her customary Queen’s Birthday speech which this year was inspired by the late Margaret (Cathy) Hopkins MBE and the relationship between St Helena and the United Kingdom.

“My call today is for us to recognise the linkages between St Helena and the UK, and the UK and St Helena. We are partners in a relationship which thrives on each other. When you look at the full breadth of the relationship, it’s not one of dependency. It’s mutually reinforcing. It’s vibrant, alive, and very much going strong. We exist together even though we are separated by thousands of miles. Let’s celebrate it as such.”

Following her speech, Governor Lisa presented Ivy Yon with her MBE that was announced in the 2017 New Year Honours. Governor Lisa also announced the 2017 Birthday Honours whereby Anthony (Tony) Leo will be awarded an MBE and Vyona (Lolly) Young a BEM.

Acts of Bravery awards were also announced for Dean Gonsalves, Paul Scipio, Craig Scipio and Ian Prickett who were instrumental in saving Frankie Gonsalves who was attacked by a shark at Ascension Island earlier this year. Finally, Badges of Honour were awarded to Tony Clingham, Robert Crowie, Tracey Williams, Giselle Richards and Anthony Thomas.

Member of the PAS Student Council, Regan Backhouse, also gave a speech on the day where she spoke about the partnership between St Helena’s current society and its youth.

“I believe as a developing society we need to be constantly asking ourselves what we are doing to inspire and encourage our youth. There are so many skilful young minds out there that are disengaged and are lacking in future ambition. I tell you this today, not only to display my great concern over the disconnection that exists between our present and future societies but also to instil a sense of hope and inspiration within you to help change this fact.”