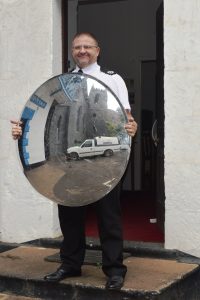 Following an appeal by St Helena Police, the stolen convex traffic mirror has been located (photo attached). It was found in Jamestown and handed to the Police yesterday, Wednesday 11 May 2016. The mirror went missing from its mounting on Ladder Hill Road in March 2016, and enquiries are ongoing to identify those responsible.

“I am delighted that the mirror has been located. The appeal, by Acting Chief Inspector Thomas, supported by a possible reward for information, appears to have had an effect.

“We are still working to identify those responsible for the theft and would ask that anyone with information contacts one of my team.”