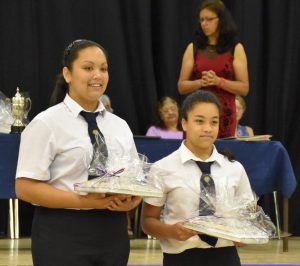 In his opening speech, the Chief Secretary highlighted to students the determination needed to achieve their goals, the importance of studying, and the responsibility of becoming successful.

“This morning we celebrate the achievements of year 11 and sixth form in examination year 2016. We also acknowledge the effort and success of Year 9 students at the end of Key Stage 3 in 2015-16.

“To students presented with certificates and awards, we congratulate you. Enjoy the moment. We hope that your success will be an inspiration to you and to others and that the awards will act as a springboard to a bright future. A few months ago on this very stage, I said that the people in this room are the future of St Helena.  Of course that was true then, and that remains the case now and it will be the same in 10, 20, or even 50 years’ time. 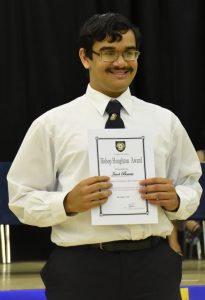 “If you follow your goal with determination you are in with a chance.  No one can do that for you. It comes from somewhere inside you. If you don’t then you will not advance at all.”

Certificates for GCSEs, VRQs & AS/A Levels, were presented to students on completion of their end of year exams. Other awards were for FCSE French. The Jean Beadon Award was presented to Embla Grahm, and the Governor’s Award went to Demi George and Brett Isaac. Tiffany Herne and Lizmarie Robbertse were then awarded with the Prince Andrew School PTA Award. The Jeanette Williams Maths Award went to Jacob Bowers, who also received The Bishop Houghton Award, presented by Jane Fenwick.

The Student of the Year award was presented to the following students, Alaina Crowie in Design & Technology, Danielle Fowler in Food Technology, Chloe Thomas in VRQ Food Studies, Dominic Moyce in Building & Construction, and Brooklyn Fowler in Automotive.

The Joy George Award, presented by Mrs George herself, went to Georgia Bedwell and Richard Francis. Following that, was the Eliza Mary Lloyd Award, which was awarded to Travis Peters.

The last award of the ceremony was for the Vocational & Year 13 Award, which was presented to Kyle Francis and Jordan Thomas. 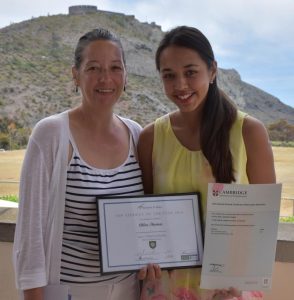 Head Teacher of Prince Andrew School, Penelope Bowers, remarked:“I offer my congratulations to all awardees, and am both pleased and proud that they have received recognition for their studies. Thanks as well go out to parents who have supported their children and encouraged them to do well.  Huge thanks are extended to the team at PAS for all their hard work, and we hope that those working towards exams next year, are inspired to do even better.”

“Today you should be proud of those receiving awards, we as students are the future generations of our Island, and today has given me much hope and anticipation for such a future. Congratulations, and may your success continue throughout your lives, wherever you are.”

To end the presentation, the Acting Director of Education & Employment gave a short speech thanking Prince Andrew School teachers, and encouraged students to work hard and achieve as much as they can.