‘His Fight for His History’

A major exhibition offering the public an opportunity to see the furniture and artefacts that surrounded Napoleon at the moment of his death on 5 May 1821, has opened at the Musee de l’Armee in Paris, France, in the presence of dignitaries including Governor and Mrs Capes (pictured at the Quai d’Orsay with Christian Masset, centre, Head of the French Foreign Ministry). The exhibition will run from Wednesday 6 April to Sunday 24 July 2016.

The exhibition was organised in conjunction with an operation to restore the furniture from Longwood House, Napoleon’s residence on St Helena, through the joint efforts of the Fondation Napoleon, the French Ministry of Foreign Affairs & International Development, the Domaines Nationaux de Sainte-Helene, the Musee National des Chateaux de Malmaison et de Bois-Preau, St Helena Government and private subscribers. 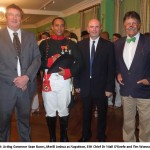 The exhibition explains the full historical and even legendary meaning to the furniture and artefacts, with themes including ‘Saint Helena – An Emperor in Exile’, ‘In the Heart of Saint Helena – the Final Battle’ and ‘Beyond Saint Helena – From Shadows to the Light’.

Almost 240 artefacts, objects and documents are displayed including, for the first time in France, many pieces of furniture from St Helena.  The organisers anticipate that over 100,000 visitors will view the displays.

A parallel reception to mark the opening of the exhibition, attended by Acting Governor Sean Burns was held at Longwood House on St Helena on Tuesday 5 April (pictured).

Commenting on his week in France, Governor Capes said:

“I am most grateful to the French Government, the Fondation Napoleon, the French Army, as well as two officials in Corsica, and so many others, for the exceptionally warm welcome extended to Tamara and me throughout a very busy and fascinating week.

“It was especially rewarding to note the senior level recognition of the importance of Napoleon’s legacy to St Helena and the excellent cooperation on various fronts to maintain and develop that legacy.

“I am sure that this superbly designed exhibition in Paris will encourage many more people to visit St Helena.”