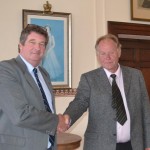 Per Mikael Olsson (Mike Olsson) took the Oaths of Office for his new role as an Elected Member on Thursday 24 March 2016 in the presence of Acting Governor Sean Burns at the Castle (photo attached).

“I am pleased to be elected as a Councillor. As mentioned previously, it was a poor turnout, but still I want to thank the people who voted for me and I am sure that they will be pleased with the outcome.”

“I would like to offer my congratulations to Mr Olsson on his election and I look forward to working with him on Legislative Council.”