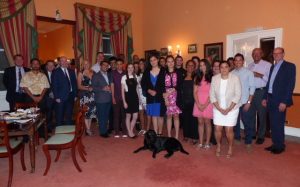 The Governor invited senior leaders from St Helena Government to the session and posed the question – ‘What advice would you give to your 18-year-old self?’ – to guide the roundtable discussions with the sixth formers.

Participants then reflected on the lessons they had learned, their career experience, and what they might have done differently if they had their time again.

“When I first arrived, and visited Prince Andrew School, the sixth formers said that they are often described as the future of the Island, but no one comes to talk to them about what that means.

“This mentoring evening was just one contribution towards their development and to help them become the leader they want to be. It was an amazing evening, full of aspiration on their part, and advice and experience on the part of SHG participants.”

“It was a very enlightening and inspiring evening, in which we as students were given valuable advice about our future and insightful experience on decision-making and life choices.”

Advice has been put together for the sixth formers and can be found here at the following link: https://www.sainthelena.gov.sh/publications/