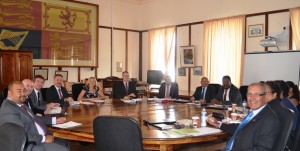 The meeting today was very full, in preparation for the forthcoming Legislative Council meeting on Wednesday 18 May 2016.  This was the first ExCo meeting chaired by Her Excellency Governor Lisa Phillips (photo attached). The Governor welcomed Members, in particular the Hon Cyril George who was standing in for Derek Thomas, who is away on Government business.

The first item was a Supplementary Appropriation Bill in relation to financing for the Main Street Hotel project.  Council was asked to adopt the Bill as Government business for the forthcoming Legislative Council meeting.  Council was also asked to endorse a motion for LegCo to provide a Government guarantee in respect of financing for the project.  In 2014 ExCo had given approval for St Helena Hotel Development Ltd to pursue the construction of a 30-bed hotel on the site of 1, 2 & 3 Main Street.  Following an extended procurement exercise, Mantis Development was appointed to assist the Company in delivery of the hotel project.  This has now reached the point where funding is required to allow the project to proceed. Councillors were supportive of the proposals although ExCo expressed concern about the recent announcements in respect of the Airport and encouraged all involved to seek an early resolution of the issues involved.

There then followed a number of proposals put forward by the Attorney General, all of which were supported by ExCo Members:

The Road Traffic (Amendment) Bill 2016 will provide that holding a communication device of any description whilst driving would be an offence.  Mobile phones, two-way radios, handheld internet devices, indeed any device which is used for communication, were all included in these changes.

The Criminal Procedure (Amendment) Bill 2016 seeks to afford Prosecution Counsel the opportunity to apply for a trial to be conducted without a Jury in certain circumstances.  It was noted that the recent report by Sasha Wass QC recommended this course of action.  It will be a matter for the Chief Justice to decide whether to accede to such requests.

The Currency (Amendment) Bill 2016 is intended to tidy up the current legislation by giving the Chief Auditor his proper title and to amend the requirement to lay audited accounts.

The Financial Secretary then introduced a paper which seeks to change the income tax regulations in respect of redundancy payments.  The current regulations call for all redundancy payments to be subject to income tax, which was thought to be unfair in certain circumstances.  It was agreed that there would be a threshold introduced of £8,400, below which there would be no tax payable.

The Financial Secretary then considered customs tax concessions for farming. Representations have been received from the Saint Helena Farmers Association and supported by the Economic Development Committee, and the Head of ANRD.  It was agreed to change the Customs Duty Statutory Concessions on a range of agricultural imports to support the farming industry.  These concessions are only available for agricultural purposes and include:

Live farm animals (other than horses)

This change was warmly welcomed by Members and endorsed.

The Attorney General then introduced the Courts (Territorial Jurisdiction) Bill, which addresses an anomaly in current legislation where a Defendant who has been sentenced to a Probation Order in Ascension and who breached that Order when in another of the Territories, could not be punished for the breach.  This was also a recommendation in the Wass Inquiry report.

In the Closed Session, Members agreed to a proposal for the Financial Secretary to purchase a crane which is currently situated in Rupert’s Bay, and is about to be dismantled and removed by Basil Read.  It was recognised that the purchase represents good value for money and will greatly assist in the freight operations in Rupert’s Wharf in due course.